A Brief Examination of Channeling 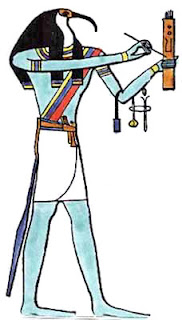 Thoth is one of the most popular of Egyptian mythological deities in the New Age Movement. Thoth is a rather odd figure, often depicted as a human with the head of an Ibis. His role in Egyptian mythology was significant. For example, he maintained the universe and was associated with magic, writing, science, and the judgment of the dead. He was thought to have been self begotten or self produced and was the master of both physical and moral law. In New Age circles he is promoted as a teacher of secret wisdom and the mysteries of life, the universe, and spirituality. How is it that a mythological deity can teach us anything? Through channeling, of course!

Channeling is an occult practice where a medium known as a "channeler" allegedly makes contact with spirits who then take control of the physical body and faculties of the channeler in order to deliver messages that convey hidden spiritual teachings lost to humanity.

One such channeler, Gillian Macbeth-Louthan, provides a good example of the type of "messages" received from the mythological Thoth.

"I am He who advances on the waves and the workings of wisdom that is shadowed and hidden from the self that sees all. I represent all that is hidden within your thoughts. I am Thoth. I come as I see each of you reaching outward to become more, reaching up to longitudes of knowledge."

"Your body and its intricate energy systems are a microcosm of the Great Pyramid of Giza."1

As is usual with such channeled messages the language is flowery and often poorly constructed and the information conveyed is always of an occult nature. Also typical of such New Age thinking is the preoccupation with the pyramid at Giza. This is a theme that runs through all of 19th and 20th century occultism, and strongly found in both Theosophy and Rosicrucianism.

Thoth is not the only channeled entity popular in the New Age. There are a host of spirits who communicate through such mediums. Entities like Seth, The Ashtar Command (aliens), Sanat Kumara, Maitreya, Saint Germain, and a whole host of so-called Ascended Masters.

So how should we as Christians view such channeled messages?

Scripture is very clear that such activity constitutes spiritism, necromancy, and outright Satanism.

"There shall not be found among you anyone who burns his son or daughter as an offering, anyone who practices divination, or tells fortunes or interprets omens, or a sorcerer or a charmer or a medium or a necromancer or one who inquires of the dead, for whoever does these things is an abomination to the Lord."- Deut. 18: 10-12

A medium is someone who acts as a vehicle or channel for spirits to speak to or through. This prohibition would include psychics and sensitives. While such people think they are in contact with Thoth, the Ashtar Command, or a dead relative, in reality they are in contact with demons, and the messages they convey are antithetical to the Gospel of Jesus Christ.

Such occultism is nothing new and was strongly denounced by the Church Fathers. There were many pagan oracles in the Hellenic world. Perhaps the most famous being that of Apollo at Delphi. These oracles were indeed the channelers and psychics of their day.

"A certain woman by drinking water gets into a frenzy, and loses her sense by the fumes of frankincense, and you pagans say that she has the gift of prophecy.."- Tatian

"As for all other oracles...what else must we declare about them than that they are the diabolical contrivance of those spirits who even at that time dwelled in eminent persons themselves...They went so far as to counterfeit a divine power under their shape and form, and, with equal persistence in evil, to deceive men."- Tertullian

"The demons especially deceive in the case of oracles."- Lactantius

It is fairly clear from the above quotes that the early church viewed such channeled messages as coming from demons, which is completely consistent with scripture.

The biblical prohibition would also cover our viewing such activities for entertainment purposes in such programs as the Long Island Medium and various "ghost hunting" shows that employ dubious technologies and occult means by which they claim to establish communication with the dead.

We must guard not just our actions, but our eyes, hearts, and thoughts against even considering such occult activities to be entertainment.