A Biblical Examination of Homosexuality 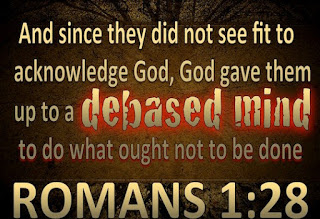 Militant homosexuals will do everything they can to justify their aberrant sexual behavior, including making claims that scripture either silently condones it, or that God "made" them that way, and thus there is no contradiction between homosexuality and Christianity. Romans chapter one, however, makes it very clear that homosexuality is an act of unbelief. As Paul says, the wrath of God is against all those "who suppress the truth in unrighteousness." (Romans 1:18) God has endowed humanity with knowledge of the Creator, and thus we are all without excuse. Paul continues:

"For they exchanged the truth of God for a lie, and worshiped and served the creature rather than the Creator, who is blessed forever. Amen. For this reason, God gave them over to degrading passions; for their women exchanged the natural function for that which is unnatural, and in the same way also the men abandoned the natural function of the woman and burned in their desire toward one another, men with men committing indecent acts and receiving in their own persons the due penalty of their error." (Romans 1:25-27)

Sacred Scripture is neither silent nor ambiguous. Homosexuality is rebellion against God's sovereign intention in creation, and a gross perversion of His good and perfect plan for His created order. The logical progression in Romans 1 is undeniable.  Immediately after his description of rebellion against God as Creator, Paul turns to the identification of homosexuality- among both men and women- as one of the signs of a culture that is in rebellion and which God has placed under judgment. Essential to understanding this point is a recognition of the fact that homosexuality is an assault on the integrity of creation and God's intention in creating humanity in two distinct and complimentary genders. Sadly many Christians and even pastors have given themselves over to the spirit of modern society- a sort of preter-naturalization of the church. In such circles, reflecting the Cultural Marxism of western culture, to even address the issue of gender is an offense to those who wish to dispose of any gender distinctions as "socially constructed concepts" lacking any real biological reality. Common sense, science and Sacred Scripture will not allow for such insanity.

As Genesis 1:27 makes apparent, God intended from the beginning to create human beings in two distinct and complimentary genders- "male and female he created them." They were distinct and in the image of God; distinct yet inseparably connected by God's design. The genders were different, and the distinction transcended mere physical differences. Even so, the man recognized in the woman "bone of my bones, and flesh of my flesh." (Genesis 2:23) The text does not stop with the creation of woman though. God's creative intention is further revealed in the cleaving of the man to the woman and in their new identity as "one flesh". This bond between man and woman was the institution of marriage- real marriage as defined by God- and was followed by these words of instruction:

"For this reason a man shall leave his father and mother, and be joined to his wife; and they shall become one flesh." (Genesis 2:24)

From this union the two were to "be fruitful and multiply". (Genesis 1:28) The Biblical assertion, which no gay activist or Leftist theologian can deconstruct, clearly places marriage and sexual relations strictly within God's creative act and order.

The early church contended with this issue as well, coming to the same conclusions. For example:

"The coupling of two males is a very shameful thing!"- Tertullian

"The sin of Sodom is contrary to nature."- Apostolic Constitutions

"The Christian man confines himself to the female gender."- Tertullian

The revolt against this divinely established order is driven by the principles of Cultural Marxism and aims at the destruction of a healthy organic Christian society. As such, Christians must not be silent, but speak out clearly regardless of how uncomfortable a depraved and rebellious society may make one feel.
Labels: Apologetics Christian theology Church Fathers Cultural Marxism culture homosexuality J. Davila-Ashcraft paleo-orthodoxy Patristics