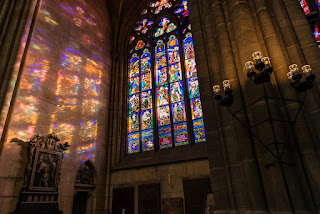 Our worldview will often determine how we answer these existential questions, though it should be said that not all worldviews are correct. The word worldview is quite broad in scope. Because of this, we have to examine the filters we develop our worldview through. There must be a standard method by which one forms their worldview, otherwise we could end up in some frightening places. According to Modernism, it is each individual's personality that determines one's worldview; a sort of egoistic headonist approach. Driven by emotion and the senses, the adherent of Modernism (Relativism) develops their worldview  based on how they feel. So truth is whatever makes them feel good, satisfied or fulfilled. The flaw in this worldview is in the fact that it is based on sense perception and sense gratification, which is entirely subjective and quite fleeting. For example, if living in a tent in the forest makes one feel good, then this person would measure his worldview by his connection to the forest and nature. This method would lead him to believe that this is objectively true. However, another person might hate being in a tent in the forest. For him, it is unpleasant. Therefore, a connection to nature would not be the standard for his worldview. This hedonistic worldview puts the individual's feelings at the center of life. It is essentially a symptom of relativism. Truth, logic and reason are not as important as subjective responses to issues, ideas and events. If two people's worldviews clash, it is not a problem for the Relativist. They will simply say, “That is your truth, and this is my truth. We're both in possession of the truth.” However, this cannot be correct, since it violates the Law of Non-Contradiction. This law states that two opposing statements cannot both be true at the same time and in the same sense. Either one statement is wrong and the other right, or both are wrong. Truth is one, exclusive and absolute. Merely believing something to be true does not make it so. I can sincerely believe that if I jump from the tallest building in New York that I will float to the ground unharmed, but my belief will not make it so. Gravity, an objective truth, will act on me and I will die a horrible death on impact with the ground.

If personal feelings aren't a basis for a worldview, what other options do we have? Some suggest that society is the standard for our worldview. If society accepts a certain act as being okay, then it is okay. For example, if society says rape is okay, beating your wife is okay, or “honor killing” is okay (as in Islamic nations), then those things are indeed moral and acceptable. This method of determining one's worldview has obvious problems. Societies often clash and can be in gross error. Islamic societies clash with the moral and ethical sensibilities of traditional Western European Christian societies. One cannot shrug this off by saying it is okay for them, but not for us. That is Relativism again, and we've already noted that this doesn't meet the criteria for truth.

We should also note that laws change, and what is forbidden today may be acceptable tomorrow. In such conditions, determining one's worldview based on society is absurd, as you cannot hold to any worldview at all. You would simply be a member of the mindless collective, following the herd under the dictates of the ruling class. For example, in Marxism (Globalism), the needs of the State outweigh the needs of the individual. A worldview in such a State is futile, since the only question that would be necessary to ask is, “Is this good for the State?”

The fact of the matter is, in today's world just as in the past, sinful men and their ideologies determine society. Power and the coercive ability of the State allows no worldview other than that which serves its own agenda. These worldviews are, in themselves, a statement of faith. They implicitly lend faith to the following beliefs:

1.Relativism- The belief that ethics and morality are man made and are person or culture specific and fluid.

3. Evolutionism-That, since only nature exists, humanity, all other life, and the cosmos are the result of chance and the living coming from non-living matter.

4. Anti-Supernaturalism-That, since humanity is the product of nature alone, we possess no soul, but consist of only a material brain/mind.

5. Anti-Moralism-Since ethics and morality are societal/man made constructs, the traditional family is unimportant, traditional gender roles are unimportant, and homosexuality and gay marriage are perfectly acceptable.

6. Cultural Marxism-Humanity is moving toward a unified state of existence as part of its evolutionary process, and thus nations, borders, traditional cultures, and any sense of national/ethnic identity is outdated, and must be opposed in favor of Globalism and Mono-Culture and the reduction of persons to the level of only having value in so far as they produce and consume.

Cultural Marxists have set their eyes on the educational and cultural bastions of Western nations with the goal of replacing the last vestiges of an already thin Christian facade within them with their own worldview. This is currently being done through, not just the institutions mentioned, but the mass migration of one of the enemies of Christianity, Islamic radicals. Thus we should understand that the worldviews we have examined are not only religious, but a cancerous ideology that seeks to enslave the entire world to its social, political and economic ideals, as prophecy tells us will occur. This leaves us with only one schematic for our worldview- Truth! That truth is contained in one place- God's Word. The world attacks Christianity precisely because it is from Christianity that a healthy worldview springs forth, both for the individual and the human family. Thus we understand that the Culture War is really not a war between conservative and liberal, Republican and Democrat, Nationalist and Globalist, but between God and Satan.
Labels: Biblical worldview Christianity J. Davila-Ashcraft meta-politics paleo-orthodoxy worldviews