Was Simon of Perea a Proto-Messiah? 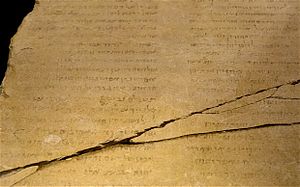 Fringe history is always offering alternative explanations for everything under the sun. From "ancient aliens" as the progenitors of the human race, to Nephilim hybrids being the cause of political intrigues, down to Reptilian aliens disguised as humans controlling the planet, proponents of fringe thinking are never at a lack for coming up with bizarre ideas. Of course, offering up silly theories about Jesus is a stock-in-trade for many of them as well. One of these fringe theories surrounds one Simon of Perea, who they claim is actually the first Messiah figure, pre-dating Jesus. This theory gained an audience through a television special aired by National Geographic, well known for their indulgence in fringe entertainment.

Is there any truth to the claims made for Simon of Perea? Let's take a closer look. First, who was Simon? According to Jewish historian Flavius Josephus:

"There was also Simon, who had been a slave of king Herod, but in other respects a comely person, of a tall and robust body; he was one that was much superior to others of his order, and had had great things committed to his care. This man was elevated at the disorderly state of things, and was so bold as to put a diadem on his head, while a certain number of the people stood by him, and by them he was declared to be a king, and he thought himself more worthy of that dignity than any one else."
"He burnt down the royal palace at Jericho, and plundered what was left in it. He also set fire to many other of the king's houses in several places of the country, utterly destroyed them, and permitted those that were with him to take what was left in them for a prey. He would have done greater things, but care was taken to repress him immediately. [The commander of Herod's infantry] Gratus joined himself to some Roman soldiers, took the forces he had with him, and met Simon. And after a great and a long fight, no small part of those that had come from Peraea (a disordered body of men, fighting rather in a bold than in a skillful manner) were destroyed. Although Simon had saved himself by flying away through a certain valley, Gratus overtook him, and cut off his head."
There is certainly nothing in this brief history of Simon to substantiate the fringe theory that he was a Messiah-like figure before Jesus who rose from the dead in three days. So our next question to be answered is, where did this idea come from? It is based on the Jeselsohn Stone, known also as the Gabriel's Revelation tablet. It is a three foot tall stone tablet containing 87 lines of Hebrew text written in ink. These texts are a series of so-called prophecies, one of which it has been claimed refers to Simon rising from the dead in three days. There are many problems with this theory, first proposed by Talmudic scholar Israel Knohl of the Jerusalem Hebrew University, the most substantial of which is that the stone has shown no provenance. In other words, it has not been demonstrated that the stone is in fact ancient nor authentic. It could very well be a manufactured hoax, which would not be surprising considering there is an entire trade in Israel and the Middle East in faked antiquities.
Knohl read in line 80 of the inscription a command from the angel Gabriel "to rise from the dead within three days". He took this command to be directed at a 1st-century Jewish rebel called Simon who was killed by the Romans in 4 BCE. Professor Stanley Seidner however, disagrees with the conclusion, noting in his study, The Knohl Hypothesis and Hazon Gabriel, that,"Knohl’s reliance upon what he calls, the 'Glorification Hymn,' in support of a first Messiah’s relationship with King Herod, failed in its carbon 14 testing. It predates Herod’s ascendancy to the throne by at least twelve years and as much as one hundred and fifty six."
Knohl has more recently changed his opinion of the interpretation of the line, and now says it reads, "by three days the sign". This of course changes the picture entirely, since a sign is vastly different from "rise from the dead."
Ultimately there is nothing at all in this story of Simon of Perea that meets the criteria for a proto-Messiah. What emerges from the only reliable source on Simon is a man who was undoubtedly arrogant, violent, and who sought personal gain through his violence. He is more zealot than Messiah. The artifact relied upon to prop up the theory is unprovenanced, could be a hoaxed antiquity, and failed its carbon 14 testing. Furthermore, there is no evidence that Simon fulfilled any of the messianic prophecies of Isaiah or any other prophet and the dating of the reign of Herod and the date of line 80 differ from anywhere between 12 and 150 years, clearly excluding Simon of Perea.
Keep in mind that fringe history buffs like Simcha Jacobovici, who promotes this same theory, do so not from a point of historical and archaeological fact, but from a set of oddball presuppositions through which all information passes to produce their high strangeness. And as usual, their conclusions are nothing more than fantasy.