An Introduction to Demonology 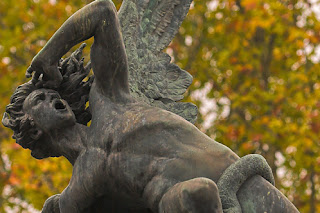 A demon is a spiritual being of angelic nature eternally damned. A demon possesses no body. Nor is there in his being any kind of subtle matter or anything remotely resembling matter. A demon is of an entirely spiritual nature of existence. In Greek pneuma is literally the word for breath or spirit. Since demons possess no body, they do not feel the slightest inclination to any sin that is committed with the body. Therefore gluttony or sexual lust are impossible in them. They may tempt men to sin in these ways, but only include those sins in a purely intellectual way, because they have no bodily senses as we do. This may account for the fact that all sin begins as a thought- a suggestion in the mind- an intellectual seed. The sins of demons, therefore, are exclusively spiritual.

Origins
God originally created all of the angels, some of which later became demons by rebellion against God.

“All things were made by Him; and without Him was not any thing made that was made.” -John 1:3

“For by Him were all things created, that are in Heaven, and that are in earth, visible and invisible, whether they be thrones, or dominions, or principalities, or powers; all things were created by Him and for Him.”-Colossians 1:16

Demons were originally like the other angels of God, with the same attributes and positions as the good angels described in Chapter Three. When Satan rebelled against God, a portion of the angels participated in his rebellion. God cast them out of Heaven, along with Satan. They were no longer good angels. They became evil spiritual beings (demons):

“And there was war in Heaven: Michael and his angels fought against the dragon (Satan); and the dragon fought and his angels. And prevailed not; neither was their place found any more in Heaven. And the great dragon was cast out, that old serpent, called the Devil, and Satan, which deceiveth the whole world: he was cast out into the earth, and his angels were cast out with him.” -Revelation 12:7-9

If demons are not "fallen" angels, then we have no other Biblical explanation for their existence. Satan cannot create his own forces, because all things were created by God and no other being has the same creative ability or power.

There are two groups of these fallen angels.

One group is actively opposing God and His people on earth. Another is confined in chains:

“For if God spared not the angels that sinned, but cast them down to Hell, and delivered them into chains of darkness to be reserved unto judgment...”- II Peter 2:4

“And the angels which kept not their first estate, but left their own habitation, he hath reserved in everlasting chains under darkness unto the judgment of the great day.” -Jude 6

There are confined demons and active demons. The leader of both groups is Satan, who is called the "prince" of devils (Matthew 12:24). As noted previously, hell is prepared for the Satan and his angels.

“Then shall He (Jesus) say also unto them on the left hand, Depart from me, ye cursed, into everlasting fire, prepared for the devil and his angels.” -Matthew 25:41

When Christ confronted two men possessed by demons, their response was:

“And behold, they cried out, “What have you to do with us, O Son of God? Have you come here to torment us before the time?” - Matthew 8:29

The demons in the possessed men knew their final destiny was a place of eternal torment. Since Hell is a place of torment and was prepared for Satan and his angels, then demons must be the fallen angels.

Sphere of Activity
Throughout Sacred Scripture, demons are shown as active on earth. Since Satan is not omnipresent, he uses demons to do his will and accomplish his purposes throughout the world. They constitute the "powers of the air" (Ephesians 2:2) and the "powers of darkness" (Colossians 1:13) and are all under the control of Satan.

Attributes
In their original sinless condition, demons had the same attributes as the good angels. In their present evil and rebellious state these demons:


The Names of Demons
Demons are called evil spirits six times and unclean spirits 23 times in the New Testament. They are also called devils (Mark 1:32) and the devil's angels (Matthew 25:41). In addition the apocryphal Book of Enoch gives the names of a number of other angels who fell separately from the rebellion of Satan. I include these only because you may encounter demons using these names and not because there is any truth to the Book of Enoch. This is not an endorsement of the Book of Enoch. As noted before, demons will often lie about their identity to avoid giving the exorcist any information whereby the demon may be expelled more easily.

Sometimes it is helpful to know the name of the demon you are confronting. Knowing a name gives one a certain insight and power over the entity not otherwise held. Many demons will take the name of a particular sin, such as lust or hate, while others may pretend to be someone historical, such as Hitler or Cain. Keep in mind that these names should not be taken at face value, but should be looked at for clues as to how the demonic entity gained entry.

Demonic Organization
Satan is an imitator, not an originator. He has organized his demons in a structure similar to that of God's forces.

“For we wrestle not against flesh and blood, but against principalities, against powers, against the rulers of the darkness of this world, against spiritual wickedness in high places.” -Ephesians 6:12

Satan has organized his forces into:
“And if Satan cast out Satan, he is divided against himself; how shall then his kingdom stand?” -Matthew 12:26

Additionally, it is important to note that demons...

Vary in Abilities and Wickedness
That demons have varying levels of power is illustrated by the demon who said he would return with other evil spirits.

“When the unclean spirit is gone out of a man, he walketh through dry places, seeking rest, and findeth none. Then he saith, I will return into my house from whence I came out; and when he is come, he findeth it empty, swept, and garnished. Then goeth he and taketh with himself seven other spirits more wicked than himself and they enter in and dwell there: And the last state of that man is worse than the first... “-Matthew 12:43-45

Change Functions
The demon in I Kings 22:21-23 declared he would be a lying spirit. This indicates he was not one previously for he said "I will be...". We often find that demons change their functions during the process of exorcism in order to confuse the presbyter as to who he is dealing with.

Are of Different Kinds
Sacred Scriptures teach that man has a body, soul and spirit. There are three major kinds of demons that attack the body and spirit of man.
Activities
Demons follow orders given by their prince, Satan. We can summarize the activities of demons by noting that they are always directed against God, against His Kingdom, against our Salvation, and His Church. Satan uses his demons to accomplish this strategy throughout the world. Demons extend Satan's power by promoting deception and wickedness. They affect individuals, governments, nations, and the world system. They promote rebellion and slander of both God and men. They promote idolatry, false doctrines, false religions, slanders, and blind people to the truth of the Gospel. Demons attack unbelievers driving them to commit the most vile acts, to murder, injure, commit suicide, etc. They affect the mind with emotional and psychological problems and the body with physical infirmities. Demons attack Christians by diabolic temptation, obsession, deception, depression, and oppression. They try to keep you in bondage to habits and fear. They accuse and slander you and create division in the Church. They target your spiritual walk with God and fight against the Church. They also attack your physical body.

Unbelievers are defenseless against the attacks of demonic powers, but Christians have powerful spiritual weapons on their side in the forms of prayer, daily devotions, reading and memorization of Scripture, and the Sacraments.

Demons and Time
Though angels are created beings that do not die, they do experience the passing of time, as all created beings do. Some theologians say they do not experience material or temporal time as we do, but a unique type of time known in Latin as aevum. This type of time is an experience only of a succession of acts of understanding and will. In this conception of aevum time, reason and will occur causing a before and after only as they apply to intellect and desire, or an act of wanting something. This is the only sense in which they experience time, since a before and after implies time. It is not an ever present "now", as God is the only Being Who is timeless.
Labels: Christian theology Christianity demonic possession demons exorcism fallen angels J. Davila-Ashcraft paleo-orthodoxy spiritual warfare theology