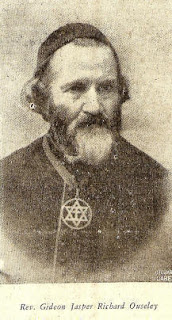 Was Jesus a vegetarian activist? Did he come to bring salvation to animals? Does the "Gospel of the Holy Twelve" contain the truth about the lost years of Jesus?

The Gospel of the Holy Twelve was published in 1901, by Rev. Gideon Jasper Ouseley. He was born in Lisbon on the 15th October, 1835, the younger son of Sir Ralph Ouseley, brought over to Ireland on the death of his father, on 14th May, 1842, by relatives, and educated in Dublin University, in which he graduated in 1858. On the 9th of December, 1906 he passed away at the age of 72.

He was, for a time, a missionary in Ireland for the Methodist Church, and ordained as a clergyman by the Bishop of Down and Connor in 1861. He left the denomination, and in 1870, voluntarily renounced meat eating, alcohol and tobacco use as inconsistent with the humanity and the true religion of Christ. He was subsequently received as a priest of the Catholic Apostolic Church, an Old Catholic sect. He then founded the Order of At-one-ment and United Templars Society, having for its motto:

Such a statement is clearly a Theosophical one, and one which appeals to modern Cultural Marxists who want to maintain at least an outward form of religiosity. Its object was to bring about a reconciliation of opposing ideas, things, persons, and systems; creating a universal religion. Because of these occult leanings, the church first suspended him. When this did not serve to bring him to his senses, he was excommunicated.

Ouseley then decided to publish his work, “The Gospel of the Holy Twelve,” claiming that it had been hidden away by members of the Essene community to keep it from being corrupted by orthodox Christians. It was claimed to be a translation of an original Aramaic document, discovered by Ouseley himself.

The text itself is clearly a mixture of the four canonical Gospels found in the New Testament and Theosophical occultism. However, Dowling changes many of Christ's teachings to fit his own extreme vegetarian worldview. The stories in the Gospel of the Holy Twelve deviate from the Gospel accounts in many ways. For example:

Is the Gospel of the Holy Twelve legitimate?

The fact is, it is rejected by academic Biblical scholars as an invention of Ouseley's vivid imagination, and has been dismissed by modern theologians and even historians and advocates of the animal rights movement.

In response to a campaign by People for the Ethical Treatment of Animals (PETA), which claimed "Jesus was a Vegetarian", the Reverend Professor Andrew Linzey1 referred to The Gospel of the Holy Twelve and similar publications, stating, "try as I may, I can find no evidence for their antiquity and I deeply fear that they are works of fiction." 2

Richard Alan Young, a Professor of New Testament Studies has similarly stated, "It appears that Ouseley created The Gospel of the Holy Twelve in support of animal welfare and vegetarianism." 3

Yet again we find that fringe history, fake gospels and occult philosophy provide nothing but lies.