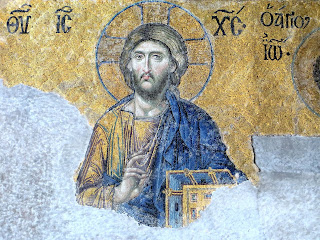 The following is an excerpt from The Messianic Secret, a book I wrote exploring the many claims about Jesus and His "lost years".

Was Jesus married? Was Mary Magdalene his wife? Did they have children- a “holy bloodline”?

The theory that Jesus was married and had children gained popularity with the publication of The Da Vinci Code. The Da Vinci Code is a 2003 mystery-detective novel by Dan Brown. It follows symbologist Robert Langdon and cryptologist Sophie Neveu after a murder in the Louvre Museum in Paris, when they become involved in a battle between the Priory of Sion and Opus Dei over the possibility of Jesus Christ having been married to Mary Magdalene. The title of the novel refers, among other things, to the finding of the first murder victim in the Grand Gallery of the Louvre, naked and posed like Leonardo da Vinci's famous drawing, the Vitruvian Man, with a cryptic message written beside his body and a pentagram drawn on his chest in his own blood.

The novel explores an alternative religious history, whose central plot point is that the Merovingian kings of France were descended from the bloodline of Jesus Christ and Mary Magdalene, ideas derived from Clive Prince's The Templar Revelation (1997) and books by Margaret Starbird. The book also refers to The Holy Blood and the Holy Grail (1982), a non-fiction occult oriented book that claims the same of Jesus. In The Holy Blood and the Holy Grail,1 the authors put forward a hypothesis, that the historical Jesus married Mary Magdalene, had one or more children, and that those children or their descendants emigrated to what is now southern France. Once there, they intermarried with the noble families that would eventually become the Merovingian dynasty, whose special claim to the throne of France is championed today by a secret society called the Priory of Sion. They concluded that the legendary Holy Grail is simultaneously the womb of Mary Magdalene and the sacred royal bloodline she gave birth to. The Priory of Sion, which is supposed to have a long history starting in 1099 and had illustrious Grand Masters including Leonardo da Vinci and Isaac Newton. According to the authors' claims, the Priory of Sion is devoted to installing the Merovingian dynasty, which ruled the Franks from 457 to 751, on the thrones of France and the rest of Europe. It is also said to have created the Knights Templar as its military arm and financial branch.2

Do these claims hold up to scrutiny?

The claims made in The Holy Blood and the Holy Grail have been the source of much investigation and criticism over the years, with many independent investigators such as 60 Minutes, Discovery Channel, Time Magazine, and the BBC concluding that many of the book's claims are simply not credible.

“The Templar-Grail myth… is at the heart of the most notorious of all the Grail pseudo-histories, The Holy Blood and The Holy Grail, which is a classic example of the conspiracy theory of history… It is essentially a text which proceeds by innuendo, not by refutable scholarly debate… Essentially, the whole argument is an ingeniously constructed series of suppositions combined with forced readings of such tangible facts as are offered.”3

The Priory of Sion myth was exhaustively debunked by journalists and scholars as one of the great hoaxes of the 20th century.4 Some writers have expressed concern that the proliferation and popularity of books, websites and films inspired by this hoax have contributed to the problem of conspiracy theories, pseudo-history and other confusions becoming more mainstream.

“The idea of keeping the family tree pruned to bonsai-like proportions is also completely fallacious. Infant mortality in pre-modern times was ridiculously high, and you'd only need one childhood accident or disease in 2000 years to wipe out the bloodline; if, however, even one extra sibling per generation survived to reproduce, the numbers of descendants would increase at an exponential rate; keep the children of Christ marrying each other, on the other hand, and eventually they'd be so inbred that the sons of God would have flippers for feet.”

“There is something called historical evidence – there is something called the historical method– and if you look around the shelves of bookshops there is a lot of history being published, and people mistake this type of history for the real thing. These kinds of books do appeal to an enormous audience who believe them to be 'history', but actually they aren't history, they are a kind of parody of history. Alas, though, I think that one has to say that this is the direction that history is going today…”6

We are at yet another dead end. Still, fringe historians will maintain this myth of the married Jesus is true, citing what they think is evidence. The two most prominent "evidences" are:
Let's look at these claims.

Being married was not an absolute must. Take the case of Rabbi Ben 'Azzai. An esteemed rabbi of his time, who preached marriage to others, but did not practice it himself. He remained celibate.

"My soul is fond of the Law," he is reported as having said; "the world will be perpetuated by others" 7

Not to mention the Essenes of Qumran, who were very much revered for their holiness, and who practiced celibacy as a general rule. It is important that any reasoned, educated historian look at Judaism of the 1st century from the perspective of that time and place, and not as some homogeneous religion. Judaism had varying sects, each with its own rules and regulations. The Pharisees were the majority, and as their religion was centered on local synagogues, it survived the destruction of the temple and became the normative Judaism. Thus, the demand for marriage. Other "Judaisms" had differing rules, as I have pointed out, that do not at all demand celibacy as a condition of the rabbinate.

As for the claim that the wedding feast at Cana was Jesus' wedding, there are obvious problems with the theory:


For those who would still cling to fringe theories, such as those basing their claims on the opinion of Dr. Karen King, perhaps her most recent statement regarding the legitimacy of the "Jesus' wife" fragment might help change such thinking. After all, she has deemed it a "probable fake".

All the evidence points to the fact that Jesus was certainly not married, and that the myth of the “married Jesus” is just that- myth. Fringe "historians" clad in their Indiana Jones gear, writing books and articles about Nephilim, Noah's "racial purity", and Jesus' "bloodline" may shout, pound their fists and throw rhetorical temper tantrums, but the facts are the facts, and they defy such myths.