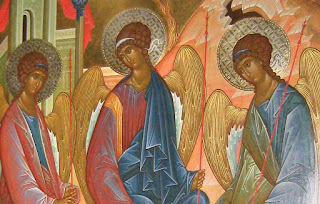 The God revealed in the Bible is holy, existing outside his Creation. The universe is not an emanation of God’s being, but was created by God ex nihilo, out of nothing—out of no pre-existing material (see the context of Gen 1:1; Exod. 20:11). The God revealed in the Bible is not impersonal energy or consciousness without qualities; The Biblical God is a Triune God, one God existing in three Persons who live in an eternal, holy, and loving relationship: Father, Son, and Holy Spirit.

The goal of Christian worship is to enter into union with the triune God through Jesus Christ. But, what is offered the Christian is not a unity of being with God; it is a unity of relationship. We are not God; we are and will always be His creatures. We do not become God. Yet through worship (and prayer) we enter into intimacy with God, we enter into the life of God. He shares with us His love, His joy, His peace. Jesus sets us free from our sinfulness and selfishness, our obsessions and compulsions, and transforms us into the unique persons God created us to be. He enables us to become people who are free to love others.


For example, our attributes of emotion, intellect, and will did not just happen. God made us in His image, after His likeness. He has revealed Himself in the Bible to be a Person. He is called Father. He is pictured as a shepherd. He is called a brother, a friend, a counselor.

We know God is a Person because He thinks, hears, wills, acts, loves, feels, and communicates. He is the living God (Josh. 3:10). Yet, He is not EXACTLY like anything or anybody. But He is exactly what He says He is, although a full understanding of what He says may be beyond our fullest comprehension. Yet we learn about Him by using what He reveals and what we already know as a bridge over which we pass to the unknown.

The Fact of God's Existence

A. Hebrews 11:6: "But without faith it is impossible to please him: for he that cometh to God must believe that he is, and that he is a rewarded of them that diligently seek him." Among other things, this verse tells us two important facts about God: 1) God exists 2) it is possible to know something of His nature.

B. Genesis 1:1: "In the beginning God ...." The Bible offers no proof of God's existence. It simply opens with the positive statement that God does exist.

C. Psalm 14:1: "The fool hath said in his heart, There is no God." This is God's opinion of a person who denies His existence. One may deny His existence in two ways: 1) an open avowal of disbelief in His existence (atheism), or 2) by ignoring His claims upon your life and living as though He did not exist.

D. The belief in God ultimately rests upon the foundation of FAITH, which is based upon the historical fact of the resurrection. The belief in God, as well as a refusal to believe in God, rests upon faith. Science cannot speak about “beginnings” because such beginnings are not reproducible and therefore outside the realm of “scientific” fact. History cannot speak about beginnings because there were no human eye-witnesses to the beginning of earth’s history. When we choose to believe the Biblical account of creation, however, we are not choosing to believe only on faith. We believe because the resurrected Lord Jesus tells us to believe the writings of Moses (Luke 24:25, 27). When we speak of "God," we are referring to the Supreme Being, the maker and sustainer of all things, who existed before all things, and will continue to exist to all eternity. He is not static essence. He is a transcendent Person who is eternally "Be-ing." Paul, with his acquaintance with Greek forms of though, speaks of the created world as providing a witness for the existence of God. At Lystra Paul told the idolatrous people that God has revealed Himself by His gifts of vegetation and its production on the earth: "He left not himself without witness, in that he did good, and gave us rain from heaven, and fruitful seasons" (Acts 14:17). It is notable that Paul calls the evidence for God's existence that may be derived from observing the material world a "witness." Logical arguments for the existence of God cannot prove God's existence. But they do witness to His existence. They show why it is more reasonable to believe in the existence of God than to not believe in His existence.

The following are five logical arguments that give witness to the existence of God.

2. Teleological evidence. (teleos = "end" or "perfect result"). Something completed or perfected shows evidence of a maker. Design implies a designer. God is the supreme designer.

3. Moral evidence. The very fact that we know there is right and wrong suggests the necessity of an absolute standard. If anything is right and anything is wrong, somewhere there is Someone who determines which is which.

4. Volitional evidence. Because man faces a myriad of choices and has the ability to make willful decisions, there must be somewhere an infinite will, and the world must be the expression of that will.