The Strange Woman in Proverbs 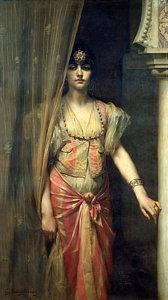 The Book of Proverbs contains warnings to young men about "the strange woman". These truths are just as important today (perhaps more so), and should be taught to young men by their fathers and mothers, What follows is a brief examination of what Sacred Scripture tells us about this person's character traits. These descriptions were written with this goal in mind:

She is described as follows:

"Who forsakes the guide of her youth and forgets the covenant of her God."- Proverbs 2:17

Her Way Leads to Death

"Her house inclines to death and her paths to the dead."
- Proverbs 2:18

"All at once he followed her like an ox going to the slaughter, like a deer stepping into a noose till an arrow pierces his liver, like a bird darting into a snare, little knowing it will cost him his life."- Proverbs 7:22-23

"Many are the victims she has brought down; her slain are a mighty throng. Her house is a highway to the grave, leading down to the chambers of death."- Proverbs 7:26-27

She Destroys Lives and Leads You to Hell

"None that go to her return again. Neither do they take hold of the paths of life."- Proverbs 2:19

"But her end is bitter as wormwood, sharp as a double edged sword."- Proverbs 5:4

She Speaks Flatteringly to Deceive

"For the lips of a strange woman drop as an honeycomb, and her mouth is smoother than oil."- Proverbs 5:3

"To keep you from the evil woman, from the flattery of the tongue off a strange woman." - Proverbs 6:24

"With persuasive words she led him astray; she seduced him with her smooth talk."- Proverbs 7:21

She is a Sexual Predator

"And why will you, my son, be ravished by a strange woman, and embrace the bosom of a stranger?"- Proverbs 5:20

She Has No Conscience

"Such is the way of an adulterous woman; she eats, and wipes her mouth, and says, 'I have done no wickedness.'"- Proverbs 30:20

"Lest you should ponder the path of life, her ways are changeable, that you cannot know them."- Proverbs 5:6

She Neglects Her Home

She Entices to Sin and Abuses the Desire to Love

"So I came out to meet you; I looked for you and have found you! I have covered my bed with colored linens from Egypt. I have perfumed my bed with myrrh, aloes and cinnamon. Come, let's drink deeply of love till morning; let's enjoy ourselves with love!"- Proverbs 7:15-18

She is an Adulterer

"My husband is not at home; he has gone on a long journey. He took his purse filled with money and will not be home till full moon."- Proverbs 7:19-20
Labels: Book of Proverbs counsel to young men and boys J. Davila-Ashcraft paleo-orthodoxy Strange Woman