Reincarnation: A Biblical and Patristic Response 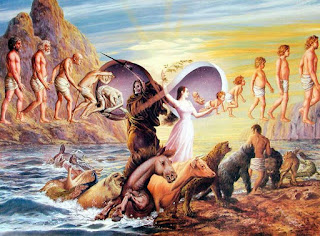 At some point, if one is involved in soul winning evangelism efforts, you'll be confronted with the question of reincarnation, or the transmigration of souls. Reincarnation is essentially a belief that a person has to live many lives and improve in each (reducing negative karma- a nebulous energy attached to one by deeds done) until they become a pure soul and either finally lose self-awareness into the mindless soup of the cosmic mind (Nirvana), or in some sects return to union with God. Alternatively, some New Age cults teach that you can choose your next life while on the spiritual plane in order to learn something in the next. One might have to live millions of lives before becoming perfect enough to escape the cycle of birth, death, and rebirth and find enlightenment however.

The illogical and Biblically antithetical nature of this teaching is as follows:

1. Sacred Scripture says it is appointed unto men once to die and then the judgment. (Hebrews 9:27) That doesn't leave any room for returning to correct the sins of the past.

"How much more worthy of acceptance is our belief that maintains that souls will return to the same bodies (in the resurrection). And how much more ridiculous is your inherited pagan teaching that the human spirit is to reappear in a dog, mule, or peacock!"
- Tertullian

2. Reincarnation teaches that a soul must live many mortal lives to reach perfection. Thus everyone undergoes a plethora of incarnations until one finally becomes an enlightened person. Nevertheless, everyone must start out as a lowly life form such as a cockroach or garden Lilly, and finally, after countless millions of years of spiritual learning and progress, become human (the only form of life in which enlightenment is possible) and have a chance to escape the material world permanently. The question arises as to how can a cockroach, dust mite, or garden Lilly logically be "bad", and how do they become a "good" cockroach or garden Lilly, such that they can advance to a higher level of life?

"Now, our position is this: that the human soul cannot by any means at all be transferred to beasts." - Tertullian

3. Reincarnation teaches that if we have a weakness or fault in this life, we must return again in the next life and overcome our failings, or, for example, revert to being a mule again, descending back down the chain of life forms.

"Souls do not transmigrate into animals."- Tertullian

4. Many offer reincarnation as a more "compassionate" view of the afterlife, as opposed to the Christian view of judgment. The proponent of reincarnation might say, "How can a loving God condemn people to hell?" This ontological argument stands on a belief that a loving God cannot also be just, which is itself absurd. The argument is an attempt at misdirection. It is meant to distract from the fact that karma and reincarnation are not compassionate at all. Karma and reincarnation are founded on the belief that any suffering we have to endure in this life, be it cancer, aids, all other sicknesses, poverty, etc., are our own fault due to the evil or bad things we did in our past life.

This is a cruel belief, as many saintly people suffer and die in the most horrific manner. To accept the concept of reincarnation would mean, for example, that Jews in Nazi Germany who died in the Holocaust ultimately deserved their fate as a matter of karma (which, indeed, some New Age leaders teach.). This is a fatalistic belief and one that encourages a very cold, impersonal view of the sufferings of others. According to this belief the murder victim deserved to be killed, the rape victim to be raped, and the abused child his/her abuse-even without cognitive memory of past bad karma. There is nothing in this that can be called compassionate and loving.

5. How can one be punished life after life so terribly for something they do not even remember from a sinful forgotten past life? Does this speak to compassion?

"We may subvert their doctrine, as to migration from body to body, by this fact: that souls remember nothing of the events which took place in their supposed previous states of existence."- Irenaeus

6. Another view favored by New Agers is that between lives we sit in some other dimension and decide exactly what kind of life we choose, be it a beggar, rich person or what have you. Therefore, our fate is consciously decided by ourselves. If this is so, then as mentioned previously, we can only assume the Jews who suffered under the Nazis chose that fate, the rapist chose to be raped, the child abuse victim chose to be abused. This again exposes the truly sick and sadistic nature of reincarnation and karma.

7. We can also ask, what then about souls like Hitler, Stalin, Nero and the numerous depraved people on earth at the moment? Did they deliberately choose to come here and live a life of evil? Exactly how would that lead to enlightenment? And what could they realistically learn by their wicked actions that could not be learned in a much more non-destructive way? This also exposes an inconsistency in reincarnation, as according to the dogmas of karma and reincarnation, such "bad karma" would only result in them slipping down the chain of life, so to speak. They would continually degenerate through each life as they become increasingly depraved, without any redeeming good qualities whatsoever.

8. If we look at the world population we see an exponential increase in the total world population, which is already at 6.5 billion and growing faster and faster by the day. Where are all these people coming from? If reincarnation is true, surely people should be reaching perfection and escaping the cycle of life and the world's population decreasing. We should be observing just the reverse of the population explosion we see. With more and more people becoming better and better (a necessity for reincarnation and karma to be logical) and finally reaching enlightenment and escaping the relentless cycle of birth and rebirth, there would logically be a subsequent decrease in the world population. And yet we see exactly the opposite.

To sum it up, reincarnation is not just illogical, but is not compassionate or loving, and is in no way founded in either Sacred Scripture, nor the writings of the Church Fathers.
Labels: Apologetics Christianity Hinduism J. Davila-Ashcraft New Age Nirvana paleo-orthodoxy Patristics reincarnation transmigration of souls