The Antiquity of the Anglican Faith 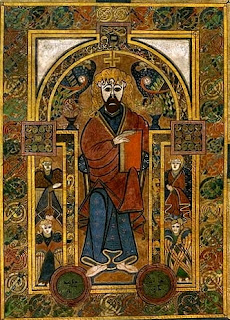 There has been a resurgence of interest in all things Celtic, including the historic church of the British Isles. The problem is there is really little information available on the specifics of the church in Ireland, Scotland and Wales. What little we do possess gives us a rather distinct picture of the church in the British Isles when compared to the Christianity found in other parts of the world. The British church is an enigma even for modern historians and theologians. On the one hand you had a church that was Biblically orthodox and, in what can be called a proto-Protestant spirit, resistant to Papal control, for which it has become the fancy of some Evangelicals and Eastern Orthodox Christians. On the other hand you have a church with a nature centered character; focused not just on God as transcendent deity, but also on God immanent in His creation, which sets it apart from Roman Christianity.

The central religious authority that early on came to the fore in the British church were known as the Culdees, a word of confusing origin, with many opinions offered to explain it. The most likely explanation is that the word comes from the word “culdich”, meaning“certain strangers.” This makes sense considering that British tradition has it that in 37 A.D., followers of Jesus Christ from afar appeared on the shores of the British Isles to spread the Gospel. These followers were said to have been Jewish, and if so, would certainly have looked different, dressed different and spoke a foreign language. In short, they were strangers in every sense of the word. One tradition, associated with Glastonbury, says that Joseph of Arimathea was the leader of this band of disciples, who had himself visited previously with the young Jesus, though this has no evidence to support it, and is almost certainly pious myth. Whatever the case, these strangers were granted an audience by Arvaragus, the king of that particular region. The king found them kind, humble and worthy of his trust, so he decided to give them a place to live in the local Druid community. Later the same king granted them a plot of land equal to “twelve hides”, where they are said to have built the first Christian Church in the British Isles. Folk tradition has it that this church was built on the very site of the now ruined abbey at Glastonbury. 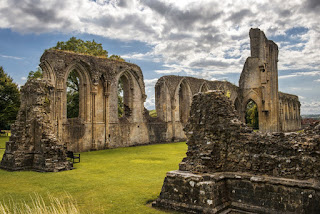 “The Domus Dei in the great monastery at Glastingbury. This Glastingbury church possesses its own villa XII hides of land for which have never been paid tax.”

This does not prove the folk tale to be completely accurate, but does at least prove an ancient origin for the abbey itself. It could very well be that the monks of Glastonbury invented the story of Joseph of Arimathea themselves to keep the faithful donating to the monastery. Such things were quite common and gave rise throughout Europe to various churches claiming to possess the body parts and personal belongings of various Biblical figures, and enough wood claimed to have been from the cross upon which Christ was crucified to build a ship. Further documentary evidence does exist to show that, after the building of the Glastonbury church, a group of Druids converted to Christianity. It would have been no surprise that, since these Druids already possessed spiritual authority and influence among the people, they would have eventually been ordained priests and certainly began to convert others-including other Druids.

One of the questions we must ask is, what influence did these former Druids have on the character of the British church? The first thing we have to understand is that Druidic spirituality was syncretistic. That is, it absorbed elements of various philosophies and religions the Druids came in contact with, much like the New Age Movement of the current era. The first Druids traveled to Britain from the Balkans finding philosophies and religions similar to theirs and adding what seemed to them a good fit. So when these Druids met the “culdich”, it would have been natural for them to adopt the truths that seemed right to them in this new religion. This doesn't mean there wasn't a true conversion, only that their ability to find commonality would have influenced their Christian worldview. This would naturally lend itself to a spirituality that revered God's created order as a manifestation of His power and presence. Add to this the fact that these Jewish strangers who taught them would have received their teachings first hand from Jesus Himself, so they were primary sources, and this would have appealed to the Druids immensely. Keep in mind that the Christianity of that time was not the Christianity of today. It wasn’t influenced by the Papacy, nor the yet to come Reformers. At the point the Celts first encountered Christianity (if the stories can be taken at face value), Christianity was not yet as intimately connected to the Imperium. It was a simpler faith, without the baggage of much of modern Christianity.

These former Druids would have been perfect candidates for church leadership. Besides having been the pagan priestly class, they were the intelligentsia. They were the physicians, naturalists, musicians and historians of their people. To become a Druid one had to memorize the entire corpus of Bardic works and all other collected knowledge of their people without the benefit of writing anything down. No simple challenge, and not one for the simple minded. Thus they were held in very high esteem as a protected class, so much so that it was considered a great crime to kill a Druid, even in war.

As the protectors of their peoples' history and heritage, we can reasonably assume there was something in this new faith that they felt was more reasonable than their pagan beliefs. When these Druids converted, they didn’t just drop their symbols, they brought many of them into their Christian faith with them. We can find evidence of this in the symbolism and sacred places of Celtic Christianity (geese, trees, groves, wells, and other creation centered symbols), as well as in such writings as the Carmina Gadelica.

Furthermore, Culdee saints are said to have talked with animals, much in the same way that Saint Francis of Assisi was said to have done, and groves, springs and wells were considered holy.

Another strong indicator that the Culdees were the heirs of Druidic authority is their occupation of the ancient Druid holy sites and groves, including the sacred Isle of Iona. This island is located off the west coast of Scotland and was the site of a large community of Druids, for which it has always been known alternately as “Innis nan Druidhneach”, old Gaelic for“Druid’s Isle”. The fact that this island held such spiritual importance in Celtic society is attested to as well by the historian Lewis Spence in his book “The Mysteries of Britain”, where he confirms this tradition, concluding,

“Their (the Druids) chief seat in Scotland was the Island of Iona.”

It was this very same stronghold of Druidic learning that the Culdees soon established their base, and where Saint Columba founded his monastery in the 6th century. Speaking of this succession of spiritual authority by the Culdees, the 19th century historian Godfrey Higgens wrote in his treatise “The Celtic Druids”,

“In the early history of the Christian church, in Britain and Ireland, we meet with an order of priests called Culdees...They had a very celebrated monastery in the Island of Iona, and others in remote situations, and these situations, by accident or design, mostly the former possessions of the Druids...the result of all the enquiries which I have made into the history of the Culdees is, that they were the last remains of the Druids, who had been converted to Christianity..”

Yet another 19th century historian, John Jamieson, wrote in his “Historical Account of the Ancient Culdees of Iona” that there is a..

“tradition in the Highlands of Scotland, that the Culdees immediately succeeded the Druids, as the ministers of religion..”

He too notes the Culdees having inherited the Druidic holy places, writing that one of the well known Christian churches at Clachan “originally belonged to a Druidical temple.” Indeed, even the unique style of tonsure the Culdees practiced was unlike any in the entire Christian world, but was exactly the same as that of the Druids.
What all of this demonstrates is that the Anglican Church as we know it today is far older than Roman apologists would have it, and was quite independent of Papal authority until the Synod of Whitby, where it succumbed to the influence of Rome due to political pressure. It remained that way until the English Reformation of the 16th century, when the Anglican Church once again asserted its independence and experienced the blessings of the Reformation.
Labels: Celtic Christianity Celtic Church Culdees Druids Early Christianity Early Church heresy heterodoxy J. Davila-Ashcraft paleo-orthodoxy Patristics