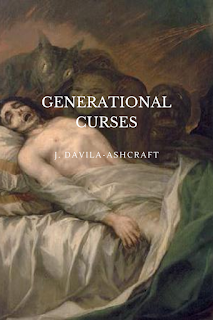 It isn't uncommon for a cleric in spiritual warfare ministry to encounter families that appear to be plagued by “bad luck”; a constant string of difficulties that hurt family cohesion, cause undue stress in marriages, and increase the risks of teenage rebellion. One of the facts many pastoral counselors fail to understand is that there are generational spirits that are attached to every family in existence, who influence us to self destructive familial behaviors and patterns. Before we address that issue it is important that we define our terms. What do we mean by “generational spirit”?

a) Any spirit passed from one person to another in any way.

b) That spirit which is passed through the family line from one generation to the next.

Sometimes referred to as “familiar” spirits, these demons can be either generational by lineage, or someone in the family does something that causes the spirit to attach itself to them, and through them attaches itself to the family, and can be passed on to future generations. In the case of those spirits passed on by lineage, the person inheriting this curse need not have done anything to open themselves up to it at all. That is an important point, since often people afflicted by demonic presences have done something to make themselves vulnerable to such attack. Not so in the case of generational spirits.

Entry
One example as to how generational spirits gain entry to the family is Freemasonry. If you have an ancestor who was a Freemason, he took upon himself an occult oath that contained a curse. This curse opened him up to the influence of a generational spirit, and because of his taking the curse upon himself allows the demon a sort of “legal right” to afflict the family for generations to come; usually four to five generations, but it can be longer. The theologically reasonable question is, why is the demon able to do so? The answer is in authority structure. When God created man he created for him a helpmate, someone to be at his side, to offer emotional support, etc. This was Eve's role. She held the subordinate position in their relationship. The authority structure of the family in descending order is:


When Eve accepted the authority of the Serpent by partaking of the fruit of the Tree of Knowledge of Good and Evil, she stepped outside her rightful authority structure and came under the authority of the fallen angel. Then, when she approached Adam and he made a willful decision to accept his wife's counsel over God's command, he too subverted the divinely appointed authority structure, giving both his wife and the Serpent, by proxy, authority over himself. More often than not, when a generational curse exists in a family it is present due to a male in the family line having given an evil spirit legal rights to enter due to his willful subversion of the rightful authority structure of the family. This isn't to say that a female member of the family can't invite a generational curse as well, but only that the male line is the most likely culprit. And once generational spirits have gained legal rights over the family, they are often used to get stronger demons into the family. What experienced exorcists have observed is that the normal duration of control by generational spirit's control spans from four to five generations.

Entry Points
It is important to note that you see going on in the family isn't necessarily the problem, but a symptom. For example, if you see issues with one financial disaster after another, that doesn't mean the parents are just irresponsible with money, but is simply a symptom of the oppression the family is experiencing as a result of the generational curse itself, so you have to be careful not to make assumptions based on what appears to be the most obvious solution or answer. Generational spirits are far more intelligent and tricky then such an approach grants them.

At the same time, exorcists have observed that the father is having issues with a particular sin, and then during independent discussion with the children, discovers they're also struggling with the same sin. This is an indication that a generational curse is at play, since they're passed on through the sin of family authority. The spirits then enter the family and attempt to propagate the sin as they work members of the family against each other. Some of these evil spirits enter solely to punish the individual, but can also be to destroy the entire family lineage if the sin is passed on to the children. The psychology of demons is such that they seek to make their victims feel all the self loathing, all the despair that they experience. In essence, they want to replicate their own character in the family, disfiguring the face of the family completely.

Identification
You can't go back in your genealogy and repent for the ancestor's sin, or change what they did. You simply need to focus on yourself and your family, not past generations or extended family. Expelling them requires the exorcist to identify what kind of demons are present. To simplify what is actually a very detailed area of study, we can break them down into four kinds.
Some of the best strategies for discovering the specific types of evil spirits present are as follows.

Grace always enlightens the mind and strengthens the will.

Expulsion
To be quite honest, it is very difficult to rid an entire family. Most of the time the spirits are able to keep hold of someone in the family line. However, the immediate family can often be helped through ongoing pastoral counseling and spiritual warfare intervention. The most effective tools available to the family are: