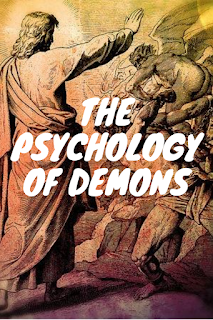 Demons exhibit a very different psychology from humans, which is understandable since they have a very different origin. As we learn from Enoch, demons find their origin in the rebellion of a group of rebellious angelic beings known as Watchers, while humanity is directly created by God. This means we exhibit very different psychologies. For example, if you beat a human daily for several hours, at some point they have a psycho-emotional breakdown. A demon, however, experiences nothing like that, as they have no “parts” to their intellect. Instead, what we find in exorcism ministry is that they experience a sort of “shut down”. In other words, when the pain they experience during an exorcism becomes so intense, their will becomes incapable of movement. Exorcism is then a sort of battle in the demon's "mind". Similar to how they attack their victim's mind, the exorcist turns the table and forces the demon into a war on its own mind. Usually a demon will reach a weakened stage within three days at most. This is why it is important to meet with the victim at least three times each week, two sessions per day, to keep the pressure intense on the demon. Following this intense schedule helps ensure victims can be liberated more quickly, generally speaking.