The Argument from Adaptation 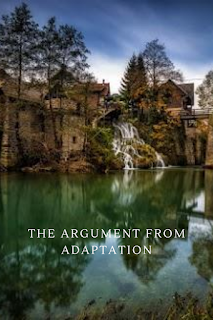 Now let's take a look at the other premise of our argument, and ask: Does nature really provide examples of the adaptation of means to ends? This fact might seem obvious, since we have so many examples of design in things around us. After all, what could be more obvious than that the ear is fashioned to hear, the eye to see, and the hand to work, just to name a few examples? Yet it is maintained by Atheistic Naturalists that we're mistaken in attributing any finality to nature. They claim the natural order is sufficiently explained by efficient causality alone. The physical agents of which the universe is formed have operated each after its kind, and in so doing have realized certain results. But this action wasn't guided by a set aim, nor was it determined in view of the attainment of a particular end. We agree that man acts in this way, since man is conscious. He proposes an end to himself, and directs his action towards its realization. But we have no reason to apply this concept to the works of nature. The analogy between human industry and the action of physical causes is invalid, and instances adduced in proof of finality have again and again proven wrong. Wheat doesn't grow so man can have bread, but man makes and eats bread because there is such a thing as wheat. The bird doesn't possess wings in order for it to fly. It flies because physical causes have given it wings.

It should be noted that there is a significant difference between these two examples. In the one case we're concerned with external finality. In the other case we're concerned with internal—the actual operation of the organ in question. It is plain that in nature internal finality is far clearer than external. It is frequently rash to assume, because a substance is useful for a particular external purpose, that it exists for that end. We can't affirm that the papyrus plant exists so that ancient Egyptians would have paper. But where internal finality is concerned there isn't the same difficulty. Our argument rests primarily on internal finality. Our first piece of evidence that there are ends in nature is drawn from the undeniable fact that our intellect recognizes, and can't avoid recognizing, finality in nature's operations. Finality is one of those features of reality which form the proper object of the intellect. It falls within the scope of that faculty to apprehend it. And if, after due consideration, it judges a given effect to be the final cause of certain antecedent phenomena, it isn't mistaken. The object of the intellect is being and those notions which are immediately connected with being, and among these we included the notion of finality. Just as, where the requisite conditions are present, the mind pronounces infallibly of a given antecedent that it is an efficient cause, so it can affirm of a given consequent that it is a final cause.
Labels: Apologetics Argument from Adaptation Christian philosophy Christianity Philosophia Christi Philosophy. Arguments for the Existence of God