The Psychology of Diabolic Temptation 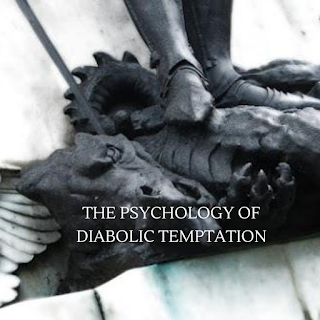 The world of Christian media is literally filled with articles, books, and videos on the topic of spiritual warfare, and quite often address the most extreme form of demonic activity-possession. While demonic possession does occur, it is very rare. The truth is there are other forms of demonic activity that are far more common, especially as it applies to our individual lives. In this article I want to address these common attacks.

Let's start with one of the most basic human facts: we have 5 senses. Sight, sound, smell, touch, and taste. It is through these five senses that we experience our world, and through which we also experience and worship our Creator. There is a sort of "force", for lack of a better word, that binds these senses together, which we can call "Common Sense". What this does is bring all the information together, and then simultaneously transfers it to our imagination and memory, usually in the form of an image. Let me give you an example. You're in a restaurant discussing your job with a friend, and you've not eaten all day and are hungry. Someone at the next table is having a huge slice of cherry pie. The scent of the pie enters your nose, activating your sense of smell, which triggers an automatic image in the imagination of a cherry pie. A little later your friend says, “Did you smell that pie?” And you of course say yes, since it is stored in your memory. All of this takes place on the material level. That is, in the matter of the brain. There's no great mystery here, and human biology and psychology explains the process quite well.

Now let's look at something called the “Passive Intellect”. This part of our Self isn't material at all. In fact, it functions completely on the immaterial/spiritual level. That is, it is independent of matter. We knows this because no physical thing is capable of being the object that is known, and the knower at the same time. The ability to be the object known and the knower at the same time is called “self awareness”. Animals aren't self aware. They're not capable of self reflection, of turning inward and considering the self. And that's because purely material things can't do this. It is at this level, that of the Passive Intellect, that we're able to grasp universal concepts. The process looks like this: the mind goes through the process we've already described in the discussion of Common Sense and the Cogitative Faculty. Next, the intellect is triggered and abstracts that information, filtering it into the Passive Intellect, so that we can grasp the entire, or deeper concept. Then the Passive Intellect examines it, and makes a judgment about certain things in the image, in relationship to the concepts. I know that's a lot to unpack, so allow me to provide a simple example. Let's say we're addressing the concept of humans. The Passive Intellect takes the received information on humans, and understands the concept of humanity, then makes a judgment that all humans are bipedal. Now it is only on the level of the Passive Intellect that we're able to make a judgment as to whether or not something is good or bad on a moral level. This moral judgment is then presented to the will, which is also immaterial. The will then makes a choice regarding the judgment.

The will can move the intellect and the lower faculties of the five senses. The will can move your arms, your eyes, can strain to listen, can resist something presented to it as attractive, etc. Why is this important to spiritual warfare? It is important for this reason: when Adam and Eve fell, they sinned through their bodies. They ate the fruit they were told not to eat. As a result of this sin through the body, their bodies not only experienced sickness, aging, disease and death, but also fell subject to diabolic influence. And because we all inherit the defects of that original sin, our bodies too are subject to diabolic influence.

The Corruption of Emotion
There are two kinds of emotion:

a) Antecedent Emotion-emotions that occur to you before you really think about it. You don't really want to feel this way, but you do.

b) Consequent Emotion-They occur upon thinking about something, considering it.

Before the Fall, Man possessed only Consequent Emotion. The emotions at that point never moved contrary to or without the consent of reason. After the fall, because Eve took delight in something that was contrary to reason, human emotions were corrupted, and thus we have Antecedent Emotion. This also had the effect of placing the lower faculties in a position to pursue an experience or idea contrary to sound reason. And as both Adam and Eve participated in the sin of eating the forbidden fruit, they left the perfect order of the will of God and placed themselves under the disordered influence of Satan. This is the basic psychology of spiritual warfare and of diabolic temptation. While it is certainly true that demons influence things external to us, such as governments, objects, etc., the primary battlefield is our minds and our bodies. Our fallen state has provided demons access to our imagination, emotions and memories. This is why we're tempted with the images of sins we've either experienced in the past or contemplated experiencing. Demons can draw upon those things in our psychology and use them to tempt us through our imagination. And thus, they can also influence our emotions. Example: Your wife wants to give you breakfast in bed. She wants to make sure she has time to make it properly, so she asks you how long you plan to stay in bed. At this point the demon manipulates the perspective you have on that question, because he can move the cogitative power, putting a negative perspective on the question. This affects the judgment, because the mind has to look back to the image to make a judgment, and the demon can manipulate how you think of that question by distorting the perspective on the image. So you hear your wife saying something very different than she intended. You might hear in the question the distorted perspective the demon introduces. “She's saying you're a lazy bum.” This is how temptation works on a psychological level. Temptation comes from introducing something into the imagination or through the cogitative power by distorting our perspective on it or moving our emotions.

Demons can manipulate us to feel certain emotional states. This is why sin often feels good, even though it isn't good for us. Demons can, in a sense, reward us for indulging in sin. They move the emotions so you feel good about whatever sin you just committed. Everyone alive is subject to this level of demonic influence. That is, diabolic temptation. It is important to understand that God never allows the demon to tempt you beyond what you are able to withstand, and all temptation can be used by God to our spiritual advantage. This is one of the key points in understanding temptation. Demons are under an incredible degree of control by God, who keeps them from doing everything they would or could. There is a common misconception in Christian circles that demons can simply act freely and do whatever they desire. This is not at all the reality. There isn't a single aspect of the greater spiritual battle we are engaged in that isn't under the absolute control of Christ. God is in absolute command of the battlefield. When temptation comes our way our part in the battle is to fight it properly, and then God uses that temptation to strengthen us in faith and resolve.