The Theology of Beauty 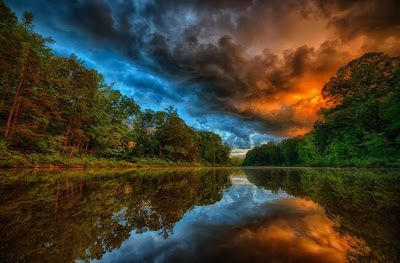 Relativism renders the cosmos, and by extension life, ugly and worthless. Allow me to prove this statement. Friedrich Nietzsche, the infamous Nihilist of the 19th century, wrote, “man shouts out his greatest hopes and dreams to the universe…and the universe turns towards him, and yawns.” In other words, the universe has absolutely no meaning, no purpose, no value, and offers nothing to inform Man of his own value, meaning, and purpose. In turn, it tells us nothing of God. Relativists, being themselves Nihilists, find themselves in the difficult position of addressing moral and ethical evils. Since they insist there are no Absolute Objective Truths (interestingly an absolute truth claim itself, and therefore self refuting), then logically the Relativist himself can't say anything is truly evil or wrong. For example, the Holocaust of the Jews, or the Armenian Genocide; since the Relativist can't really argue that these things were objectively evil, he is forced to say that he calls those things evil or wrong simply based on his own subjective sentiment.
The meaningless universe of the Relativist is what necessarily follows their philosophy. When God, and therefore Absolute Objective Moral values, are removed from the equation, nihilism is the logical outcome. Rather than acknowledge the beauty, order, and meaning of creation, modern Relativists have done what the ancient Gnostic heretics did. They try to remove the beauty, order, and meaning from the material world, instead presenting it as a purposeless illusion from which the enlightened must escape. The Nietzschean "yawning" cosmos is the same exact Gnostic heresy. Christians who take seriously the challenges to our Faith need to be aware of the transcendental properties of being in order to explain why Man and the cosmos possess meaning and purpose.
These transcendental properties are like the colors of a prism that show themselves when we shine light through it. The light is fragmented into various colors. The light remains the same; the prism simply allows the light to reveal other aspects of that same beam of light. It is much the same with these transcendental properties of being: oneness, goodness, truth, and beauty. They add nothing to being itself, they are not like other attributes like diamonds on a gold ring or the snow on the peak of a distant mountain—these attributes only characterize some very definite things; the transcendental properties can be discerned in every being and are found in every being.

Everything that exists can be understood by the intellect—thus being is true; all can be desired as fulfilling and, thus, are good; everything that exists possesses inner unity and self-identity—and is, therefore, one. Since these aspects can be recognized concerning beings that exist around us, we can infer that such characteristics, stripped of their limiting imperfections, exist in God who made all things ex nihilo. God isn't merely good, but rather Goodness itself.
When we consider the question of the status of beauty as a transcendental property of being, a quality and characteristic which all things would have insofar as they exist, the answer would seem to be clear-cut; Aquinas lists the properties as: the one, a thing, a being, something, the good, and the true. Everything that is real has the unity of being one, it is potentially desirable (good), it can be known by the mind (true), it is a thing, a being, and it is something. Augustine refers to God as "Beauty ever ancient and ever new", which is certainly glimpsed in reduced quality in the things He has created.
Beauty is that which when seen pleases. Not only must it be seen, but it must please when it is seen. How can beauty then apply to all things—many of which don't please the eye—and to God, who can't even be seen by the human eye?
The belief concerning the beauty of all creation was a belief and sentiment coming into the Middle Ages from many sources. First and foremost was the Bible.
The philosophical works which express this teaching on the beauty of all things and the close affinity between the good and the beautiful are seen in the writings of a 5th century Syrian monk, known as Pseudo-Dionysius. According to Dionysius:

The good and the beautiful are also characterized by their possession of two qualities, namely clarity, and right-proportion. These are the primary attributes of beauty.
What is the difference then between the good and the beautiful as transcendental properties that qualify and characterize all things insofar as they exist? The beautiful and the good are identical in the subject. That is, within the beautiful and good things themselves. Brightness and consonance, which are sources of beauty, are also an aspect of the good, insofar as they are effects of the Good, which creates and orders. Nonetheless, the beautiful and the good differ conceptually, that is, according to the way in which they are conceived, according to the chosen point of view. Whereas the good, being what all things desire, properly relates to the satisfaction of appetite and with a goal towards which action moves, the beautiful refers to something, the mere mental or visual apprehension of which gives pleasure." While the goodness of all things entices us with promises of fulfillment and ultimate happiness, the beauty of all things, shining with the light of God-given form and with the clarity of visual or intellectual contours, beckons us to be still and rejoice in the splendor of form which we find in the other.
Labels: aesthetics Apologetics beauty Christian philosophy Christian theology Christianity God and beauty J. Davila-Ashcraft paleo-orthodoxy theology