Are You Being Watched? Global Earth Observation System of Systems 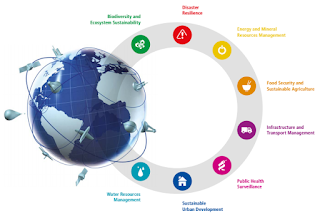 “What is at stake is more than one small country, it is a big idea – a New World Order, where diverse nations are drawn together in a common cause, to achieve the universal aspirations of mankind; peace and security, freedom, and the rule of law… A world in which there is the very real prospect of a new world order.” –President George H. W. Bush, January 29, 1991

Students of eschatology have long been aware of the prophetic warnings about a global system of governance, under the control of the Anti-Christ, that will seek to control every aspect of human life. While various theories have been proposed throughout Christian history as to the identity of the Anti-Christ and just what that global government will be, the one consistent thread is that of the Book of Revelation's warning. While I view many of the theories with an eye of skepticism, it is always a wise thing to be aware of what is happening in our world and how it could, in fact, be a part of a grander web that the Anti-Christ will use to his advantage when he emerges. One of the projects that I believe could very well be the forerunner of just such a scenario is the project titled "Global Earth Observation System of Systems" (GEOSS). This is basically a system tying in all of the satellite systems of the various governments of Europe, Asia and the United States. This system, developed from 2005 to 2015, monitors every ship on the oceans and rivers, every plane on the ground and in the sky, every phone call made, every radio and television broadcast, every internet search and email, and even every single person's movements throughout the day. The GEOSS platform manual says the following:

"The GEO Strategic Plan states that “GEO is a coalition of governments and participating Organizations having as its mission the implementation of the Global Earth Observation System of Systems (GEOSS) to meet the need for timely, quality long-term global information as a basis for sound decision-making”. Earth observations from diverse sources, including satellite, airborne, in-situ platforms, and citizen observatories, when integrated together, provide powerful tools for understanding the past and present conditions of Earth systems, as well as the interplay between them”. The GEOSS Platform formerly called the GEOSS Common Infrastructure (GCI) has been created to provide the technological tool to implement the Global Earth Observation System of Systems (GEOSS). The birth of the former GCI has been in 2008, as Clearinghouse catalogue, in 2012 the GCI evolved into a Brokering infrastructure with the inclusion of the GEO Discovery and Access Broker (GEO DAB). The first user interface, the GEOSS Portal was initially created in 2010 and in 2016 has seen great enhancements in terms of user experience and enhanced discovery, access and visualization functionalities. In 2017 the formerly called GCI has evolved into a GEOSS Platform."

The rather noble sounding reasoning for GEOSS is that it helps manage world resources in times of disaster, shortening response time and recovery time. This system also has the capability of allowing centralized control over the means of production, of movement/travel and of food and energy. China has made much use of this system in monitoring it's citizens as part of the "social credit" system, which some Leftist politicians here in the U.S. have praised. Many of those now interred in the various concentration camps in China made their way to those so-called "re-education camps" through the use of this technology. It isn't a stretch of the imagination to suggest that other governments are using this system to spy on citizens, and could use it to intern perceived political dissidents in such camps, as that tends to be what governments with this sort of power do. Such a system is ripe for abuse, and the Anti-Christ will make the Chinese Communists look like amateurs. So, the question was "Are you being watched?" The answer is, yes. Christians and Jews in particular need to be aware of such technology, as it rests in the hands of those who have made very public pronouncements of their disdain for both groups. The Anti-Christ and his government will have great power and authority. (Revelation 13:2; 13:7) As scripture also makes clear, he will persecute the faithful tremendously. Awareness, then, is of utmost importance.

The following video is a promotional/informational one praising the positives of the system, while completely ignoring the potential dangers.