The Earth Charter and Pope Francis 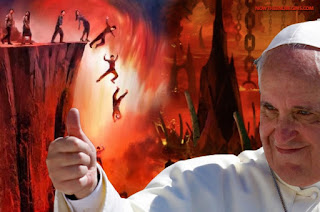 The Earth Charter, a very radical New Age/Globalist declaration, given much impetus by the equally Globalist and New Age organization Club of Rome, has found some common ground with the heretical and Cultural Marxist Pope Francis due to his papal encyclical "Laudato Si". That should come as no surprise to those paying attention to the rhetoric and activities of Pope Francis, who fits in quite well with the Club of Rome and it's cadre of supporters in the United Nations.

The Earth Charter lays out it's basic premise thus:

"We stand at a critical moment in earth's history, a time when humanity must choose it's future. As the world becomes increasingly interdependent and fragile, the future at once holds great peril and great promise. To move forward we must recognize that in the midst of a magnificent diversity of cultures and life forms we are one human family and one earth community with a common destiny. We must join together to bring forth a sustainable global society founded on respect for nature, universal human rights, economic justice, and a culture of peace."

Notice the all to familiar themes of both the New Age Movement and Cultural Marxism. While noting the diversity of cultures, the Earth Charter advocates for a mono-culture in a global government, and with a socialist worldview (economic justice). Added to this is the near pantheistic view of nature as taking center stage in such a global government. In Laudato Si, Pope Francis refers to the Earth Charter, writing:

"The Earth Charter asked us to leave behind a period of self destruction and make a new start, but we have not as yet developed a universal awareness needed to achieve this. I would echo that challenge: "As never before in human history, common destiny beckons us to seek a new beginning.."

This "new beginning" of a global socialist state should sound familiar to students of Sacred Scripture, in particular of prophecy. The Book of Revelation reveals that the Anti-Christ will control an end time government of global proportions, reigning over "all kindreds, and tongues, and nations." (Rev. 13:7) Pope Francis is not an innocent stooge falling into line with the Globalist agenda,, he has given every indication that he is fully sold on it and determined to be an active participant in ushering in the reign of the Anti-Christ.
Labels: Anti-Christ Earth Charter Globalism Laudato Si paleo-orthodoxy Pope Francis