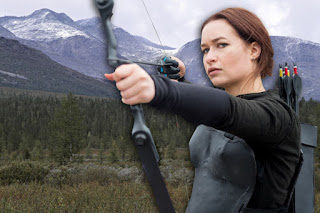 Entertainment, like art and music, reflect the culture from which they spring. There is no getting around the fact that television has become a cesspool of Leftist propaganda, immorality, and downright depravity. Of course, this hasn’t just hit our screens. These culturally destructive attitudes, ideas and behaviors have been increasingly introduced over the years, such that now it is no longer shocking to see sex scenes between couples (including homosexual and lesbian couples), extremely graphic violence, and the glorification of non-Christian values. Well, we’re in a whole new realm of depravity now. Last April I became aware of a Russian television show set to begin that had critics referring to it as a real life Hunger Games.
Game 2: Winter, is set on a remote Russian island where temperatures will drop as low as -58 F during filming which lasts nine months. Fifteen men and women will compete in a struggle for survival with only a knife, one pair of warm clothes, and whatever survival gear they choose. The most frightening thing about this “game”? There are no rules against violence, rape, murder or anything else they may choose to do. While the producers warn that the police may choose to prosecute, the fact that they’ve left the door open for such criminal and immoral activity is a sad indictment indeed.
With 1.7 million dollars up for grabs, as well as personal survival in the most harsh conditions, disaster may be inevitable. How did we get to this point, that such potential brutality has become a source of entertainment?
Television reality shows are literally filled with examples of people mistreating each other for our entertainment. For example, Real Housewives of L.A. features several women, each as hateful as can be to each other, their interaction sometimes erupting into violence. We could also take the case of Janelle Evans, a star of the reality show Teen Mom 2, who was arrested for beating her friend Brittany Truett on video over a boyfriend. Truett, attributing Evans’ behavior to her appearance on the reality show said, “Since she got on that show, she has a big head. She’s been angry at the world.” Other notable violent acts in reality TV programs are: Jersey Shore– The petite female cast member Snooki was punched in the face by a man, and on The Real World Seattle– Stephen slapped female cast member Irene in the face without provocation. And, as most know, many of these programs contain gratuitous sexual acts, almost as if they were written in to the show to keep viewers watching, and they may have been.
It isn’t just reality television that bombards us with such images. Other television programs do so as well. Some of the most violent have been:
• Stalker– A woman is burned alive in the first five minutes of the pilot, and it gets more violent from there.
• Hannibal-Replete with disgusting images of gore and cannibalism.
• American Horror Story– Featuring Twisty the Clown, a gory character who treats us to murder scenes and even a beheading.
• Game of Thrones– Every sort of depravity imagined, from rape to incest to violence.
• The Following– Serial killers, kidnapping and torture, drinking victims’ blood. One critic called it, “one of the most violent…series ever made by a commercial broadcast network.”


I could also step on some toes and point out that such sporting events as Bellator and the U.F.C. are little more than modern versions of the gladiatorial games of the Roman empire. You might recall we Christians were often forced into those arenas for the entertainment of the prevailing pagan culture. I can already hear some of my readers attempting to reason that these sporting events are different. "I mean, they’re just sports, right?" I’m sure the Romans who enjoyed the games had similar justifications for their love of such entertainment. I mean, Christians were criminals after all, right?
“The gladiator games are prepared so that blood may gladden the lust of cruel eyes…”- Cyprian
“Yet they call these “sports”, in which human blood is shed!”- Lactantius
Indeed, these Church Fathers provide commentary from their time that could easily apply to many of today’s reality television shows glorifying violence, as well as the many other sinful actions. In our depravity we watch these programs and sporting events to fulfill the lust of cruel eyes, and perverted hearts and minds. We think ourselves civilized, we pay to see these acts of violence and/or tune in every week to see who is cheating on who, and then we go to church like nothing happened. Are we really living the Gospel if we indulge in such "entertainments"? I rather think that in this age of Cultural Marxist dominance we are far more barbaric than we might wish to think- even we Christians. “Over-civilization and Barbarism are within an inch of each other. "- G.K. Chesterton
In the wake of such “entertainment”, can we really be surprised at the dramatic rise in violence, sexual promiscuity, unwanted pregnancy, abortion rights activism, politically charged violence, and disrespect for basic human dignity we see today? People are fed a steady diet of entertainments that not only destroy any sense of right and wrong and truth and falsehood, but also of proper conduct and respect for others and themselves. My suggestion is to block such programs and other forms of entertainment from your home entirely. Teach your children what it is to live by Christ’s rules of human conduct.
A teacher of the Law asked Jesus:
“Teacher, what is the greatest commandment of the Law?” And He said to Him, “You shall love the Lord your God with all your heart, and with all your soul, and with all your mind. The second is like it, ‘You shall love your neighbor as yourself.”
-Matthew 22:35-40


What does it mean to love your neighbor as yourself? Does that mean I can beat my neighbor for stealing my significant other away, or say cruel and hurtful things to someone I feel has wronged me; or get into a caged octagon and choke him out for cash?
No, loving our neighbor as ourselves means we seek their highest good, just as Christ sought our highest good. Nobody’s highest good is found in cruelty, physical violence, or placing them on a deserted island with no rules, no morality other than a cold survival at all stakes.
This Russian reality program has helped reveal the depravity of humanity. When money means more than even safety, mutual human dignity, respect, and decency the problem runs deeper than the television show. It is a heart problem, and only Christ can adequately address it.
Labels: Christianity Church Fathers entertainment morality paleo-orthodoxy television violence