Worship of a Pagan Goddess in a Roman Catholic Mass? 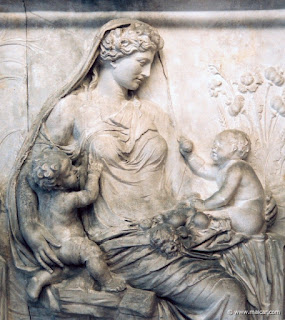 While I recognize that my headline might be sensational, it is not at all stretching the truth. Many of us have understood the many problems in the Catholic Church for some time, most of them issuing forth from the hallowed halls of the Vatican itself. However, we rarely see outright and blatant paganism and idolatry disguised as worship of the one true God. The Archdiocese of Toronto changed that during one of their televised Masses back in 2015. During this blasphemous ritual, which the priest and parish in question would defend as the Eucharist, they sang a hymn titled, "O' Beautiful Gaia". Gaia, for those who do not know, is the ancient Greek pagan Mother Goddess and personification of the earth. She is referred to as the mother of the pagan deity Uranus (a sky god), with whom she had sexual relations and bore the Titans and "Giants". Students of the work of Derek Gilbert will recognize the links to the Book of Enoch and Genesis 6. While those who chose this hymn would likely argue that it is simply an ode to our planet, even that is problematic, as the Eucharist is a means of grace instituted by Christ, wherein we commemorate His sacrifice for the forgiveness of sins, and not a platform to promote some misguided extremist version of environmental action. Using such a hymn in effect politicizes the Eucharist, making it a platform for Cultural Marxist ideology.

The hymn itself was written by Carolyn McDade, an American "Progressive" (socialist) and radical Feminist. The lyrics are as follows:

In the recesses of our being we hear the call…the first and deepest call…
the call of Earth, through water and wind, forest and farmland, inviting
us to become one again with all that lives. We are called home
to our place within the Earth community. We are called on, into the
ongoing relatedness of creation.

Waves crashing on granite, O Gaia calling us home
Pine bending in windstorm, calling us on.

The following is the video of the Mass in question. The hymn to the pagan goddess Gaia begins at the 27:30 mark.

The Apostle John warns us regarding such idolatrous worship in writing, "Little children, guard yourselves from idols." (1 John 5:21) And God instructed the Israelites that, "You shall have no other gods before Me." (Exodus 20:3) It is important that we warn others of the dangers such seemingly innocent actions have, and to encourage them in worship of the One, True, and Living God, the only Creator and Master of Heaven and Earth.
Labels: blasphemy Book of Enoch Derek Gilbert Eucharist paganism paleo-orthodoxy Roman Catholic Church