Christ the King and His Kingdom

God is infinitely Holy, and no one can draw near to Him and live. He has, nevertheless, revealed to us many heavenly mysteries, including that of the Trinity. We would have known nothing of this if God 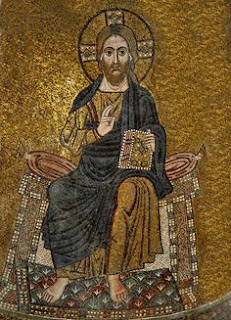 Himself had not revealed it to us. There is in that sense a coming down of God to us, of Him "who alone has immortality, who dwells in unapproachable light, whom no one has seen nor can see.” (1 Timothy 6:16) Yet, this revelation takes place under the veil of Faith, and as such, it is open only to the humble and the pure of heart that He has chosen. Those under the sway of the various secular ideologies and social fads ("the world" in biblical language), to a great extent, will not accept His revelation. They are blinded to spiritual realities by their indoctrination in the principles of Atheistic Naturalism, anti-Supernaturalism, Humanism, and Relativism.

Throughout the history of His chosen people, the revelation of God’s mysteries has been gradual, reaching its climax with the coming of God Himself in the flesh, “the mystery hidden for ages and generations but now revealed to his saints.” (Colossians 1:26) The Son has become man, and, in a way which escapes our full understanding, has shown the wholeness of His Father.

This principle has a social application as well as spiritual. As Christ revealed to us His divinity, and as the Church makes Christ’s mystery known to any who hear, likewise the Kingdom message of the Gospel is, in an analogical manner, a manifestation or revelation of Christ’s mystery. This is what living the Christian Faith properly is: the manifestation of the principles of Christ’s present and future Kingdom through the social body of the Church. It is a shadow of the future earthly Kingdom of God where He will reign over all nations and peoples.

The Gospel of Jesus Christ is not simply a "religious" or spirituaal message, but a social fabric in which Christianity penetrates down to the last corners of our temporal lives (customs, uses, games and work), a counter-culture in which the temporal is unceasingly infused by the eternal. Concretely, it is the ensemble of peoples who want to live publicly according to the Gospel of Jesus Christ to their absolute fullest measure.


In this Gospel of the Kingdom, there is the certainty that Faith and life, united, form an indissoluble whole. Without deserting the world in a monastery, but without losing sight of the true sense of life, it ordains the whole of human existence towards a unique goal, towards intimate social fellowship with God, being convinced that outside Him there is no lasting peace, either for the heart of man or for society or for the community of nations.
Labels: Christendom Christian theology J. Davila-Ashcraft meta-politics paleo-orthodoxy social kingship of Christ