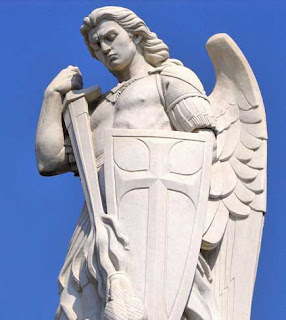 What Are Angels?
Angels are ministering spirits sent by God to do His will.

“Are they not all ministering spirits, sent forth to minister for them who shall be heirs of salvation.” -Hebrews 1:14

"Let us consider the whole multitude of His angels how they stand ready to minister to His will." -Clement of Rome

The title "angel" means messenger. Angels were created by God.

“For by Him were all things created, that are in Heaven, and that are in earth, visible and invisible, whether they be thrones, or dominions, or principalities, or powers: all things were created by Him and for Him." -Colossians 1:16

All the angels were righteous and holy when they were first created. They worshiped and served the one true God.

The Organization of Angels
The holy Angels have been organized by God in a special order.

"We recognize also a multitude of angels and ministers, whom God, the Maker and Framer of the world, distributed and appointed to their various posts by His Logos." -Athenagoras

"The other angels were created by Him, and entrusted with the control of matter and the forms of matter."- Athenagoras

The Orders of Angels
The angels were created in hierarchy. Science tells us that material creation, that which we can see, accounts for only a small percentage of existence. That leaves a vast amount of things we do not see that are very real. This means that, since there is a guardian angel for each person, there must be billions of angels just in the lower hierarchy of angels, and traditionally there are 9 “choirs” of angels. A third of these angels fell. Their fall was a rebellion to Christ- His authority. Satan refused to serve. So when we speak of demonic activity we must keep in mind that in every case it is ultimately rooted in rebellion to Christ. There are literally multitudes of angels (Luke 2:13-15) who are apparently classified according to the duties they perform. We will not explore all nine choirs, but these are a few of the main classifications of angels.

"God works through archangels and kindred angels..." -Clement of Alexandria

Messengers- This function of angels is most likely the largest in number. These are the angels composing the innumerable group, visualized by Daniel (Daniel 7:10), who carry out the will of God in Heaven and on earth. This is the group that usually relates to the Christian in terms of spiritual warfare, though this is not to say others do not assist as well. They interpret God's will, protect, provide guidance, bring answers to prayer, announce, warn, instruct, bring judgment, encourage, sustain, deliver, and intercede on behalf of Christians. This order would also encompass guardian angels.

"Every believer-although the humblest in the church is said to be attended by an angel, who the Savior declares always beholds the face of God the Father. Now, this angel has the purpose of being his guardian. So if that person is rendered unworthy by his lack of obedience, the angel of God is said to be taken from him." -Origen

Cherubim- This order of angels is first mentioned in Genesis 3:24. They are also mentioned as part of the ark of the covenant (Exodus 25:18-22). Ezekiel mentions these beings and describes them as having four appearances; the face of a lion, the face of an ox, the face of a man, and the face of an eagle (Ezekiel 1:3-28; 10:22). This symbolism of the cherubim suggests they are the living creatures surrounding the throne of God in Revelation 4:6. They appear to be the highest order of angels, the guardians of God. Satan was originally a part of this order.

Seraphim- This order is mentioned in Isaiah 6:2,6. Their position is above the throne of God in contrast to the position of cherubim who surround His throne. The duty of these angels seems to be to lead Heaven in the worship of God. In addition to the different orders of angels, there are some individual angels mentioned by name in Sacred Scripture.

"The great and glorious angel Michael is he who has authority over this people, and governs them." -Hermas

"When Michael, the archangel, disputing with the devil, debated about the body of Moses...." - Hippolytus

The Attributes of Angels

Attributes are personality traits or characteristics of an individual.

Angels are active in both Heaven and on earth. The source of their power is both granted and governed by God. They have access to the presence of God in Heaven.

"...In Heaven their angels do always behold the face of my Father which is in Heaven." -Matthew 18:10

The future activities of angels will include:
• Participating in the return of Jesus: I Thessalonians 4:16
• Gathering the elect: Matthew 24:31
• Warning and preaching during the tribulation: Revelation 14:6-9
• Separating the wicked from the righteous: Matthew 13:39 and 49
• Binding Satan: Revelation 20

Angels and Spiritual Warfare
Angels usually relate to the Christian in terms of spiritual warfare. They interpret God's will, protect, provide guidance, bring answers to prayer, announce, warn, instruct, bring judgment, encourage, sustain, deliver, and intercede on behalf of priests and laity in battle. Many Christians have not availed themselves of the aid available from angels because they have not been taught regarding their function in spiritual warfare. They may have rejected the ministry of angels due to poor instruction, or anti-Catholic bias. They are "ministering spirits" and can minister for you as well as to you. You can ask God to dispatch angels to assist you in battle. King David did this. He prayed...

Read the following Biblical accounts of angels participating in warring against the enemy:
Important Warnings

Angels are holy beings with important duties they must carry out on behalf of the Church Militant. But Sacred Scripture gives some warnings concerning angels.

1. You are not to worship angels:

"Let no man beguile you of your reward in a voluntary humility and worshiping of angels, intruding into those things which he hath not seen, vainly puffed up by his fleshly mind." -Colossians 2:18

"And I John saw these things, and heard them. And when I had heard and seen, I fell down to worship before the feet of the angel which shewed me these things. Then saith he unto me, See thou do it not: for I am thy fellow servant and of thy brethren the prophets, and of them which keep the sayings of this book: Worship God."-Revelation 22:8-9

2. Angels will not bring messages opposing the Scriptures

Some people have claimed to have been visited by angels who gave them a "new revelation" contrary to God's revelation and deposit of Faith given to the Church. Entire religious movements have been founded on such false revelations.

"But though we, or an angel from Heaven, preach any other gospel unto you than that which we have preached unto you, let him be accursed. -Galatians 1:8 You are not to listen to a man, an angel, or any other being that would guide you contrary to the teachings of the Church. As you will learn, one of the main strategies of Satan is deception. And no marvel; for Satan himself is transformed into an angel of light." -II Corinthians 11:14 2

3. Do not provoke angels!

Read the story of Balaam in Numbers 22, a prophet who was acting in disobedience to God. You will note that he was opposed by an angel of the Lord. When you are disobedient to God, the angels may actually hinder you. You will be fighting a battle, but it will not be warfare against the enemy. Be careful that you do not provoke the angels of God (Ecclesiastes 5:1-6).
Labels: activities of angels angelology angels Christian Christianity Early Christianity Early Church J. Davila-Ashcraft paleo-orthodoxy Patristics theology