Judge Not, You Hypocrite! 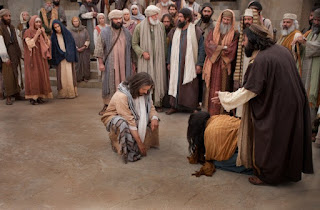 Jesus' admonition is often used to attack Christians who dare to speak to the immorality of the world. Inevitably some Social Justice Warrior who is either an Atheist (and so quoting scripture seems a bit disingenuous), or claims to be a Christian (in name only), or a poorly informed believer who screeches, "Judge Not!"  What does that really mean?

Examples of Contemporary Uses of Matthew 7:1

Leftist, Denay Burris op-ed piece in The Lincoln Echo, Arizona: In reference to Christian opposition to same sex marriage she says, “Now lets refer to the Bible. Matthew 7:1. Judge not, that ye be not judged. Refer to John 8:1-11 [“let him that is without sin cast the first stone”], and Romans 2:1-3.”

In Abortion: My Choice, God's Grace : Christian Women Tell Their Stories, Anne Eggebroten asserts, “as Christians we must not judge those who have found themselves in need of an abortion” (p. 198).

Ball State Daily News headline: “Judge Not, That Ye Be Not Judged.”

Content:  "It is hypocritical to say Islam is an evil, dangerous, hate-promoting religion, since the Bible has texts in it like, “When you march up to attack a city, first offer it terms of peace. If it agrees to your terms of peace and opens its gates to you, all the people to be found in it shall serve you in forced labor. But if it refuses to make peace with you and instead offers you battle ... put every male in it to the sword” (Deut. 20:10-13). 9/11/2003


During one of Stryper’s concert tours, they hired the secular group White Lion as the opening act. During some of the concerts White Lion openly used filthy, vulgar profanity on stage. At one concert they even threw out pornographic magazines into the audience. In an interview Michael Sweet was asked, "How did you guys deal with that when it happened?” Michael replied, “We felt we couldn’t judge any other group. If we told them, hey, you can’t do this and you can’t do that, we would be judging them.”


These misapplications of scripture are rampant and ignore Biblical Texts which require judging. Texts such as:
The question we have to ask is, what are the principles of application for judging or refraining from judgment?

3. Christians should serve as arbitrators (i.e., judges) over disputes between Christians. I Cor. 6:1-8.

1. We are prohibited from judging others based on a simplistic reading of Scriptures. We must consider all the Scripture teaches to be able to “judge righteous judgment.” – John 7:24


3. We are prohibited from speaking negatively about fellow believers and condemning them – Luke 6:37; James 4:11-12.
a. If they have sinned, then #3 under What is required (above) applies to us.

b. If we don’t like what they are doing, we may entreat them to change, but if they do not, we are to forbear one another in love (Col. 3:13).
c. Love for others assumes the best about them and their motives (I Cor. 13).

The following are a sampling of common scenarios which are violations of the biblical principle “Judge Not”:


1. Believers discuss another believer’s behavior that they don’t like: “I don’t have confidence in anybody who would say that or act like that.”


2. Believers assuming that another believer’s motive is self-centered or sinful, and on that basis criticizing them and/or condemning them, i.e., “They did wrong”; “They cheated”; “They lied”


3. Believers who listen to information that damages another believer’s reputation without rebuking the gossiper, and thus implicitly participating in the gossiper’s judging of the other person. This one is rampant!


4. Complaining about the actions of a believer or group of believers (church, para-church organization, etc) and criticizing them without having first followed the biblical pattern for dealing with a brother who sins against you.

How to Respond when Matthew 7:1 is quoted:


Matthew 7:15-16:  "Beware of the false prophets, who come to you in sheep's clothing, but inwardly are ravenous wolves. You will know them by their fruits."


Suggestion 2: Jesus said to the woman caught in adultery: Go and sin no more. He identified her behavior as sinful, extended mercy to her, and commanded her to live a holy life.

Suggestion 3: Point out that scripture advises us to judge, and that, if we do not judge ideas, issues, etc. by the measure of scripture, then we are not living a Biblical life, but a secular, Relativist, Cultural Marxist life.
Labels: Biblical principles of judging J. Davila-Ashcraft judgment judgmentalism Matthew 7:1 New Testament paleo-orthodoxy theology