Heroes of the Faith: Jacobus Arminius 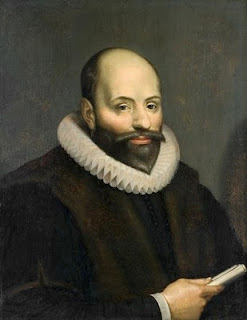 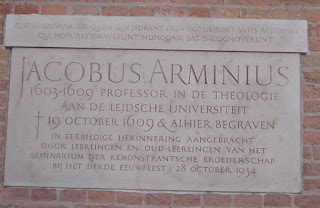 On July 25, 1609, Jacobus Bontebal defended the theses De vocatione hominis ad salutem under Arminius's presidency. A Roman Catholic priest (rumored to be a Jesuit) was in the audience and dared to oppose Arminius' positions. While an already seriously ill Arminius refuted the arguments, Gomarus "who was among the audience, became alternately flushing and deathly pale, and afterwards, while the Papist was within earshot, he insultingly remarked to his colleague that now the door to Papism had been widely opened."
Arminius, on October 19, 1609, died at his home at the Pieterskerkhof. He was buried in the Pieterskerk at Leiden, where a memorial stone on his behalf was placed in 1934.
Labels: Arminianism Calvinism J. Davila-Ashcraft Jacobus Arminius John Calvin paleo-orthodoxy Reformation