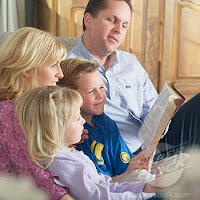 Western society and its culture (such as it is) are in a state of decay. My basic presupposition is that this decay is inherent in worldly systems, as they are all, at some level, counterfeits of the Kingdom of God. That said, traditional Western European cultures at least honored God in their morals, ethics, and honor of God. As a priest advocating the Traditional Anglican Faith, I believe in doing all we can to restore these Christian principles to culture. This can only happen when the individual Christian is intensely faithful to the orthodox expression of the Faith. Each of us can contribute to a healthy culture by advancing four principles in their lives.

The Four Pillars of an organic and healthy social order are: Faith, Family, Tradition and Culture. The Christian Faith sustains the Christian Family; the Family perpetuates the Faith (and this by virtue of a high view of the Word of God), and through active church involvement, promotes both Apostolic Tradition and traditional Christian culture; and Faith, Family and Tradition form the life blood of a healthy Christian culture-a culture that recognizes the personal and social reign of Christ the King and the present reality of His Kingdom.These Four Pillars, if adhered to by the Faithful,will naturally produce a healthy community.

The various political and social constructs of the world are the exact opposite of this. We live in a world of Cultural Marxism, Relativism, and Immorality. It is an anti-culture known as Modernity. Modernity militates against the Four Pillars through Atheistic Naturalism, sexual "freedom", Feminism, promotion of gender as a social construct rather than a natural biological reality, destruction of the traditional family, a production-consumer lifestyle, social justice, Critical Race Theory, and ultimately Global Totalitarianism. This push for "sameness" strips humanity of the unique blessings of each people group, strips them of the dignity of their having been created in the image of God, and renders them slaves to a superstate ruled by an ungodly oligarchy. This "New World Order" or "Great Reset" is the Atheistic Naturalist's counterfeit of the Kingdom of God.

These disasters find their temporal root in the Enlightenment, and its subsequent revolutions. The principles of "Liberty, Equality and Fraternity"-Egalitarian principles- are the exact opposite of the biblical principle of Complementarianism.

Egalitarianism is the belief that we are all equal, in all ways. It is the first step toward the destruction of God's created order for humanity. Here we are not speaking of the spiritual egalitarianism given expression by the Apostle Paul.

"There is neither Jew nor Greek, neither slave nor free, nor is there male and female, for you are all one in Christ Jesus."- Galatians 3:28

Though feminists and other egalitarian revolutionaries like to quote this verse in support of their agenda, the fact is under close examination of the context Paul was not speaking either of nature or of social order, but of our positional relationship to Christ. Paul was speaking of a spiritual egalitarianism. However, the Cultural Marxists, if they were to rewrite this verse, would give us something akin to:

There is neither male or female, gay or straight, morality or immorality, for these are all social constructs that the enlightened progressive person has evolved beyond.

Divinely ordained gender roles, family structure and value, social expectations, etc. are all rejected as repressive, oppressive, and outdated. Even nature itself is defied through the rejection of natural biological gender and sexuality. When one really thinks about it, Modernity is insanity, out of touch even with reality- the way the world really is!


Biblical Complementarianism, on the other hand, recognizes the reality of the world we live in. That is, it recognizes the balance inherent in nature as a matter of creative principle. For example, the relationship between male and female is complementary; in the procreative act, in the dignity of persons, and in social order. Men and women are not equal with regard to natural ability, proclivity, or sensibilities. Each possesses a strength the other does not. To suggest otherwise is to completely ignore the created order, which is exactly what the various socio-political philosophies of the world do by promoting an essentially Evolutionary worldview. Gender exists as a matter of nature (biology), and to deny the reality of gender, to claim it is merely a social construct, is to deny nature the complementary nature of the created world. This complementarian principle permeates the cosmos down to the cellular level. And yet, for all their faith in Scientism, the egalitarian Atheistic Naturalist absolutely rejects these facts of science in favor of their peculiar political-religious worldview.

It is indeed insanity.

The antidote to all of this is only found in Christ and His eternal Truths, which demand we honor the traditional family, procreate and raise godly children, demand consistent biblical morals from our children, friends, associates, and representatives. We must have the courage to vocally and actively reject everything from our surrounding sinful cultures that does not conform to these eternal Truths!
Labels: Atheistic Naturalism Biblical Compeimentarianism Christianity Cultural Marxism Egalitarianism French Revolution J. Davila-Ashcraft meta-politics Modernity paleo-orthodoxy