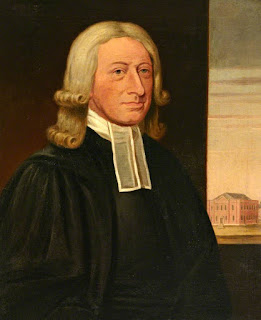 The issue of whether John Wesley maintained his line of Apostolic Succession in his ordination of Bishop Thomas Coke is often contentious. Those of a Roman Catholic and ethnic Orthodox persuasion would perhaps argue that he didn't, since he wasn't recognized as a bishop by the Anglican Church. Is this necessary, however, in order to continue a line of succession in a time of need? While Wesley was an Anglican, I think the example of Catholicism is the correct view on the subject at hand. Roman Catholicism traditionally recognized in its canon law (Canon 209 of the 1917 Code of Canon Law) the authority of clergy to act outside the normative structure if the situation was serious enough to qualify as an "extraordinary time." In other words, if it is imperative that a church have presbyters for its survival, then ordination would be considered lawful. There are two principles upon which this canon law was established.

1. The salvation of souls is the highest law.
2. The good of the faithful is more important than formality.

This is the case where the church recognizes the jurisdiction of a presbyter without going through the channels of the normal hierarchy. In other words, Christ Himself as Head of His Church, gives jurisdiction to presbyters in some particular cases. After all, the difference between a presbyter and a bishop is not one of quantity (both possess Apostolic Succession), but merely one of function. In fact, the early church didn't even recognize a clear distinction between the presbyter and the bishop until the 2nd century. Not to mention that we find no mention in the New Testament of a prohibition on presbyters ordaining others to ministerial service. This doesn't mean one ignores the normative structure of church authority, and certainly doesn't mean that everyone who breaks with that authority does so validly. Wesley certainly attempted to go through the normal channels to have ministers ordained, but the Bishop of London flatly refused to ordain anyone in the American Colonies. However, Wesley understood the pressing need for ordination in apostolic succession. He wrote: