Christ: One Will or Two? 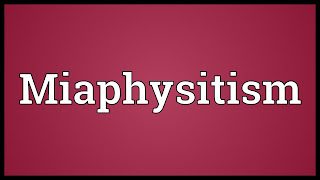 The charge of heresy can be thrown around quite easily when discussing the subject of Christ's human and divine natures and His will/s. The two prevailing Christological opinions are:

1. Monothelitism- The position that Jesus has two natures, but only one will.


2. Dyothelitism- The position that Jesus has two natures and two wills.


An associate of mine, Patrick Dewhurst, wrote an interesting position paper on this issue. His paper led to quite a mixed response. Interestingly, he argued for a theological position that some confused with Monothelitism. However, what he argued for is actually Miaphysitism. What is Miaphysitism? Miaphysitism holds that after the union, Christ is in one theanthropic nature (human-divine), which is generated from the union of the two natures, the two being united without separation, without confusion, and without alteration, each maintaining its particularity. Allow me to quote from Mr. Dewhurst's paper:


"To understand.... we must first at look two concepts. The first is Communicato Idiomatum, the second is Perichoresis. Communicato Idiomatum is the idea that both the divine nature of Jesus and His human nature are communicating their own properties to the single person of Jesus. Rather than viewing Jesus as a circle with two halves- a divine side and a human side, think of those halves communicating with each other and influencing each other so closely that they become impossible to separate. On never takes over and swallows the other, but neither do they split up. There is perfect unity between the two natures."

This is clearly a statement of Miaphysitism. He continues:

"The second important concept to understand is the idea of Perichoresis, which means an embracing, a proceeding around, walking about on all sides, and the existence of one with another. It is an active intermingling of the two natures, interpenetration without one ever succumbing to the other. Although all illustrations about God will eventually break down since they are man made, the best way I can explain it is like this. As humans we exist in the physical realm which mean that we can do physical activities like pick up objects and set them down. However, in order to do that there are millions of thought process that have to take place. We can’t do anything with our bodies without our mental capacities taking part. If we were to separate the two, we would have a brain dead person laying on a bed even though their body is completely healthy. Understandably this analogy breaks down in the face of an eternal God, however the idea of one person made up of two integral factors remains the same. Jesus is one person who is made up of both the divine and the human. To remove one would destroy the personhood of Jesus."

He is absolutely correct. To remove either the human or divine nature would be to undermine either Christ's humanity or His divinity. Indeed, this would be heresy, not the Miaphysite position!

"Does Jesus have one or two wills? Can his human act independently of his divinity? Imagine a three dimensional sphere like a bouncy ball made of two swirling colors. The two colors swirl and even intersect, but they never take over as the dominant color, there is always an even mixture. Let’s name the bouncy ball Jesus. This is image of Perichoresis; two colors, one bouncy ball. With Jesus, His two natures are constantly mixing together, never separating but yet never mixing to the point where they create a ‘third’ color either. Now, if the person of Jesus is to take an action, then naturally we would assume that there would be the divine action as well as the human action. However, His actions are a replication of the same intermingling going on in His person. Therefore we don’t have two wills acting out indiscriminately. Instead the two actions again communicate and stick with each other much like the double helix structure of a DNA strand. There is the human on one side and the divine on the other side, but they can’t be separated. The two natures of Jesus mingle together so much that just as the two natures make up one person, in the same way they make up one will. My conclusion is this, Jesus has one will that is made up from the inseparable influences of his divine and human natures. For Him to act strictly in His divinity would be to deny His humanity just as acting strictly in the power of His humanity would be to deny his divinity."

"The distinction of natures being by no means taken away by the union, but rather the property of each nature being preserved, and concurring in one Person and one Subsistence, not parted or divided into two persons, but one and the same Son..."

The Miaphysite Christological position seemingly fits this definition quite well, though I recognize that the Miaphysites reject the Council of Chalcedon, the Oriental Orthodox communion of churches being the main proponents of this position. I have attempted a study of the Early Church Fathers to discern and detect their positions with regard to the topic, and I can quite honestly say that to date I have found nothing that contradicts or refutes the Miaphysite position. I suspect that theologians are talking past each other on this issue. I welcome input from my readers. I am always open to more Biblical data.
Labels: Chalcedonian Creed Christology Dyothelite J. Davila-Ashcraft Miaphysite Monothelite paleo-orthodoxy Patrick Dewhurst