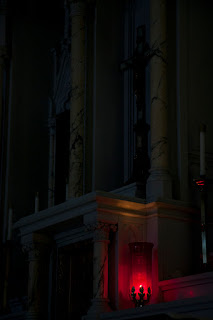 The current paranormal fad is one which I believe contains no small amount of spiritual danger. The fact that most in that subculture have either a Gnostic, neo-pagan, or Relativist worldview, and that dabbling in Necromancy (albeit often "high tech"), and consulting psychics who are undoubtedly contacting demons, not the dear departed- this all equals spiritual dangers. Add to this the utter lack of substantive and concrete knowledge and methodologies and you have a recipe for spiritual disaster. Even defining basic terms becomes a chore since most have the rather New Age view that all answers are equally correct, and thus they accept the most juvenile concepts. Lets define a few terms that should be basic.

Natural: is the action which is proper to the structure of nature. When we speak of nature, we are referring the nature of the material universe. Things in this category follow the laws of nature.

Preternatural: is the action which goes beyond the structure of the nature of the material universe. The fruit of the action of an angelic or demonic nature is said to be preternatural. The word comes from the Latin "praeter naturam", beyond nature.

Supernatural: is the action which goes beyond any created nature. This form of activity belongs only to God. In this category would be prophecy, revelation, and salvation, for example.

Material nature is responsible for many oddities, but it will always be according the the laws of the material world and can always be explained by science. Most of the "evidence" offered by paranormal groups and claimants is easily explained by these sciences, whether it be physics, environmental sciences, or psychology.

However, demons defy the laws of nature and can do such things as levitate objects, move things, attack one invisibly, etc. They can do things which go beyond the possibilities of the material world, but they cannot go beyond the laws of their own created natures. As an aside, there are no "water demons" or "tree demons". Demons are fallen angels. They are not bound to material objects or elements of nature. They don't travel by river, or phone wires. They don't manifest at "dead time" (another paranormal myth). To suggest otherwise demonstrates a profound lack of understanding regarding their nature.

Demons also cannot possess or take a soul. This is again more misinformation. They can influence the mind however. For example, a beautiful forest filled with tress, flowers and birds singing can remind me of God's beauty, which is something natural. This can in turn cause me to reflect on my relationship with Jesus Christ and pray fervently. Likewise a demon can use pornography, visions of violence, etc. to cause the mind to focus and dwell on evil and sin, and thus influence the mind in such a way as to cause us to act out our sinful fantasies and temptations. While an angel or demon can influence the mind, God can influence the soul by bestowing spiritual grace. All workings of grace are also in the supernatural category, and thus the vehicles of that grace ( Scripture reading, prayer, worship, the sacraments) are also supernatural.

Investigating cases of demonic possession is not as simple as doing an EVP search or listening to the highly dubious information issuing forth from the supposed psychic. It requires serious training not just in Christian theological matters of spiritual warfare, but methodology, personal spiritual life, prayer, and pastoral counseling. The minister who would engage in this area of ministry must be of strong moral and ethical character. He must adhere to the teachings of the orthodox Christian faith without exception. We cannot afford to run to the closest "Old Catholic" who may or may not be a valid priest, or who may or may not be a schismatic or heretic. We cannot afford to run to the closest Evangelical minister who shouts the loudest, pounds a victim's head with his Bible and jumps up and down. It is essential to seek out a minister who demonstrates a level headed approach to the subject matter and who brings in medical and mental health professionals on every case placed before him. If a minister does anything less he does spiritual and emotional violence to the person seeking help. It cannot be stressed enough that the minister's moral, ethical and spiritual character are of paramount importance. Not everyone who calls themselves Christian are, nor is everyone who puts on a clerical collar a valid or orthodox priest. I cannot stress enough that the most important aspect of spiritual warfare ministry is maintaining a strong personal spiritual life.