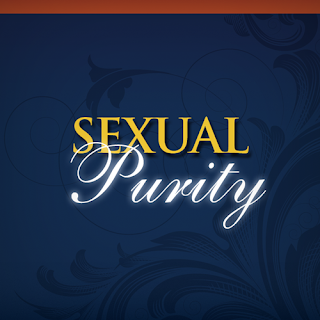 3 It is God’s will that you should be sanctified: that you should avoid sexual immorality; 4 that each of you should learn to control your own body[a] in a way that is holy and honorable, 5 not in passionate lust like the pagans, who do not know God; 6 and that in this matter no one should wrong or take advantage of a brother or sister. The Lord will punish all those who commit such sins, as we told you and warned you before. 7 For God did not call us to be impure, but to live a holy life. - I Thessalonians 4:3-7

Paul is writing here to the Christians in Thessalonica who were surrounded by the influences of their previous pagan lifestyles, which included religious practices that made sexual immorality a sacrament. It was a normal practice to have sex with temple prostitutes and even for husbands and wives to engage in adultery as a common practice. And while we don't have quite the same culture today, we're not very far from it.

However, you can lead a sexually pure life.

I. Consecration
The word “sanctification” is from the Greek word hagiasmos, meaning “holiness” and “purity of life”.

•    Does this purity just happen or do we have to actively seek it and do something?

Sanctification itself, though a unique work of God, requires something of us. It requires we make the effort to cease doing evil, and learn to do good. In other words, your part in your sanctification is that you subdue the unholy habits in your life and cultivate principles of holiness. This is essentially consecration.

•    When you hear the word consecration, what comes to mind?

Consecration is an action.

It is more than merely a mental assent, or praying a prayer once and being done with it. It is like an athlete training for any given sport. The athlete can't simply say he or she is going to win a gold medal and then sit back on the couch and hope to make that happen without action. The athlete has to train. And training is sometimes difficult. It hurts.

Likewise consecration is action, on an inner level as well as external. You see, the spiritual life is real. It isn't just concepts tossed on a page and packaged as suggestions. Consecration is real and you have to put it into action, otherwise you will fail and may even walk away thinking it's impossible, or that God somehow failed you. That isn't the case at all. The only failure is that you failed to follow up on scriptural admonitions with affirmative action.

I once saw a hidden camera show where they would secretly follow husbands who were away on business trips at the request of their wives, hoping to find any evidence of infidelity. And as you might expect this show found more than enough evidence that I'm sure destroyed a few marriages. One husband was quite interesting though. The program followed him to the hotel restaurant where he sat at a bar eating his dinner alone. They sent in a decoy- a beautiful blonde model- to tempt him to sin. She flirted, and  cooed at him; was provocative and finally asked him to go back to her room with her. The husband looked up from his dinner and said, “You're a pretty girl, but I'm married and I love my wife, so no thanks.” I have no idea whether this husband was a Christian or not, but he certainly exemplified control of his own body and implied he understood at least a basic concept of consecration. He could have done exactly what the Apostle tells us not to do. He could have taken advantage of this woman. He could have defrauded his brother. What is it to defraud someone? Simply put, it is to take something that doesn't belong to you. That woman in the hotel wasn't his wife. She might have been someone else's wife, or in the future she will get married and this husband will have defrauded her future husband of a part of her that was intended for him alone. But he didn't. You see, he demonstrated his commitment to controlling passion and lust for a higher good. He understood the sanctity of his marriage covenant. He had consecrated himself to his wife. And you can do the same. You can lead a sexually pure life.

II. Take Your Thoughts Captive
To maintain this state of consecration and avoid sexual immorality we can do many things.

We can get accountability partners, memorize scripture, get rid of occasions of sin in your life, such as computers, certain television programming, etc. However, the most important place to begin is in the mind- your thoughts.

II Corinthians 10:5 states, “..we take captive every thought to make it obedient to Christ.”

There are a variety of things we can do to “take our thoughts captive”, which is where the battleground for sexual immorality (indeed all sin) begins. We need to pay careful attention to our thoughts. There is a process to a thought taking root. Sinful thoughts begin as mere suggestions. They can arise from our own frailties and failings, or they can even be suggested to us by the Adversary. Then the thought will proceed to a conversation, where an interest arises in you for that thought. Then you move to acceptance of the thought, followed by captivity to the thought which ultimately leads to manifestation of the sin suggested. You see, sin requires no effort on your part whatsoever, only that you passively accept the initial suggestion, rather than actively rejecting it through consecration.

•    Consecration then implies we abandon any sense of being a victim of sin. We are not simply prey, unable to help ourselves. You are perfectly able, with the grace of God to live a sexually pure life. Consecration works hand in hand with God's part of the equation, which is sanctification. When we actively engage ourselves in consecration, God will, through the sacrifice of Christ, make us “set apart” unto Himself.

•    This is not talking about salvation by works. Quite the contrary. The point in observing your thoughts is that it reveals you cannot trust in yourself. You must trust in God alone. This is the entire reason consecration is so necessary.

•    Consecration is not a comfortable, passive life. It isn't a life where you attend church, pay tithes, maybe have a few spiritual highs here and there with no real demand on you or any substantial responsibility. It is a fundamental change in how we approach God, so that He is at the center and our goal is ever deeper communion with Him.
Labels: consecration hagiasmos holiness I Thessalonians 4:3-7 J. Davila-Ashcraft paleo-orthodoxy sexual purity