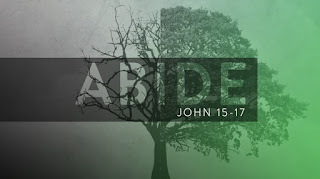 SERMON NOTES
JOHN 15:1-8
J. Davila-Ashcraft
This was a dark moment in the life of our Savior. Jesus is giving his disciples final instructions as he knows he is about to die. There is a repetition that seems to stress urgency here. He previously explained to them what was going to happen and that he wouldn’t say much more to them. And so in these final moments, he is urging them to be steadfast considering what was about to happen.

And just as he urged his apostles, Jesus wants you to remain in him.

When I was in the Army one of the things I was called upon to do was the extraction of innocents or wounded. This meant that I went into a combat area, found them and brought them back out as safely as possible. Now this required something of them as well. While I had the skill and capability to get them to safety, they had to do three things: 1. They had to follow my instructions to the letter. No deviation whatsoever. 2. They had to remain behind me at all times. 3. If unable to walk, they had to allow me to carry them out and trust my instructions and skills to do so. This might seem completely disconnected from what Jesus is saying here, but just keep that in mind as we go along and we'll come back to visit this.

Right now lets look at three things: What is a vine? What does it mean to remain? And what is the end result?

vs. 2- The gardener is the one who plants and tends the garden. And when he sees a part of the plant that is stagnant, withering, he “cuts off” that rotten piece from the body of the vine, away from the healthy plant. Now I don't know about you, but I'm not to keen on being cut off from Christ or his kingdom. And as Jesus is explaining here in the most simple of agricultural terms is that the only way to avoid that is to remain in him. And you can remain in him. The terms are actually simple as we shall see. That's where the fruit comes into the picture.

Here Jesus also says that the branch that does bear fruit, God prunes so that it produces even more fruit. What does he mean by prune? Well, when a gardener prunes a plant they often cut off parts that aren't contributing to its growth, parts that hinder its production to its fullest capacity. In our lives this pruning process may be difficult. It may be a process of removing things, places, people or even deeply held ideas about life or ministry. Any of those things that get in the way of you producing fruit according to God's will, he prunes. There's a catch though. To be pruned you have to remain in the true vine.

II. What does it mean to remain?
Vs. 4- Jesus wants you to remain in him. This word “remain” isn't a request, but a command to preserve our relationship with him. This isn't optional, it's a part of the total package of discipleship. When you were a child and your parents told you to stay in your room for punishment, you didn't say, “Okay”, and then run off whenever you felt like it to the back yard. That wasn't your command. And if you did you knew the punishment was just going to get worse. It's the same with God. If you don't remain in Jesus, you're cut off. He wants you to remain in him.

And when we read the words “in me”, what we're actually saying is that you as a Christian should be living in a state of total reliance and trust in Christ, finding ones identity in him and him alone, and not in the things of this world. A disturbing statistic was laid out back in 1991. Leadership Magazine found that in a poll of one thousand pastors, 12 % of them had committed adultery while in the active ministry. That is one out of 8 pastors. 23% admitted they had done something sexually inappropriate while in the ministry. Christianity Today did a similar poll, but focused on Christians in general. Out of one thousand subscribers to the magazine polled, 23% admitted to having extra-marital intercourse, while 45% admitted to doing something sexually inappropriate. Now, while these statistics are a bit dated, I'd be very surprised if things somehow got better. Does this indicate remaining in Jesus? I don't think so. However, you CAN remain in him.

“no branch can bear fruit by itself”- Nothing good can be produced from within ourselves apart from the one who is all Good- the vine. Especially not if we're reflecting the character of Satan.

vs.6- “If you do not remain”- You might ask, “Well how do I know if I'm remaining in him or not?” The first clue is if you ignore his commandments when it is convenient for you to do so. If you do not find your identity in Christ, if your personal convictions do not match up to His, if you think that secret sins are truly secret, you aren't remaining. And the sad result of that is to be thrown into the fire and burned. Some like to make an allegory of this particular statement, but I honestly think this is a literal reference to eternal damnation. You cannot ignore God's decretive will and hope to walk away unscathed.

vs. 7- “my words remain in you”- His teachings become part of your being, not mere points of belief or something we mentally agree with but have no realization of in a concrete way. His words must be so much a part of our mental processes, our emotional processes, our entire existence that we could not possibly violate them willingly. To do so must become unthinkable!

“ask whatever you wish”- Does this mean I can ask for that new Porsche and a mansion and paycheck like Joel Osteen? No. This must be taken in context with the rest of scripture and is not a “magic lamp” sort of statement. God isn't a genie that, if you're good enough, you can rub the lamp and “poof!”, he grants three wishes. It means that whatever is in God’s will for us, whatever serves our highest good he will provide in his time.

III. What is the end result?
vs. 8- “my Father’s glory”- This brings God honor, praise, worship and veneration. Now I don't want you to walk away thinking it's all you-it's all your work. No, this is Christ reflected in your character that brings God glory.

“showing yourselves to be my disciples”- The evidence of discipleship is in what is both within us and manifests outwardly from that internal character.

Jesus identifies the main way we can remain in him. (read verses 9 and 10)

Love others even when you don’t want to. Check your reactions to people, situations against the example of Jesus. Find your identity not in the fleeting things of this world, but in him and him alone.

You might say it’s too difficult, or you have a lack of prayer life that hinders this, no scripture study, no development of the character of Christ in your life. Well, you know what to do, don't you? Reverse that trend. Do what he says to do so that you can remain in him.

You can remain in Jesus. It requires discipline of your inclination to “do it yourself”. It requires absolute trust in his word. And it requires you to stay as close to him as possible, following him through to the kingdom.
Labels: abide in me discipleship John 15 New Testament paleo-orthodoxy spiritual formation theology